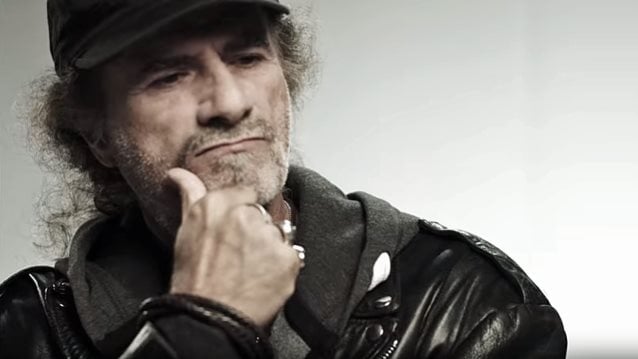 KROKUS singer Marc Storace says that he would "certainly" accept an invitation to step in for AC/DC frontman Brian Johnson, who has been advised by doctors to stop touring immediately or risk total hearing loss.

The Maltese-born vocalist, whose band has opened for AC/DC in the past and who once turned down an opportunity to audition to replace the late Bon Scott in 1980, tells BlastEcho in a brand new interview (hear audio below): "It's amazing after so many years that this situation comes up again. It's really, really incredible."

He continues: "As far as it concerns me, obviously there's my loyalty to KROKUS, but the guys would understand if the offer came and I would certainly take it up this time and go for an audition. Then it's up to [AC/DC lead guitarist] Angus [Young] to decide. For me, AC/DC is Angus Young — no offense to Brian Johnson. I think Brian Johnson did a magnificent job with his special unique kind of voice. But losing your hearing is not a nice thing. It's like losing our eyesight for a musician."

The 64-year-old Storace tells BlastEcho that no one from the AC/DC camp has contacted him yet about filling in for Johnson, but adds somewhat cryptically: "I actually didn't even have to call Sony [both AC/DC and KROKUS are Sony artists]. They were already on the ball. This thing is not an easy thing to decide. I don't know what's happening and I don't wanna ask. I'm concentrating on my life and if they decide it's gonna be someone else, I'll continue with my life like I've always [done]."

Storace admitted in a previous interview that he initially had some understandable reservations about being repeatedly compared to Scott, feeling he was being "branded as a copy of somebody who, at the time, I didn't even know that well." But he eventually started seeing things differently. "Today, I look at is as a big compliment. I think he probably had many of the same idols I had, and we were both gifted with the same vocal tonalities."

Back in 2000, Storace released an album with a project called DC WORLD in which he sang Bon Scott-era AC/DC songs. Audio samples from that effort can be heard in a YouTube clip below.

Storace confirmed to the Swiss newspaper Blick in a 2013 interview that he was invited to replace Scott in AC/DC more than three decades ago. He said: "Yes, I was considered. At the time AC/DC searched for a successor for the late Bon Scott. One day a guy flew from Birmingham, England to Solothurn, Switzerland and told me to come for an audition. I wasn't interested at all… I was happy in Switzerland. KROKUS started just to break through internationally — even in the United States. We were No. 1 everywhere. In the band, there was this great camaraderie. I did not wanted to leave to go anywhere else. I was here at home. I am a loyal dog."