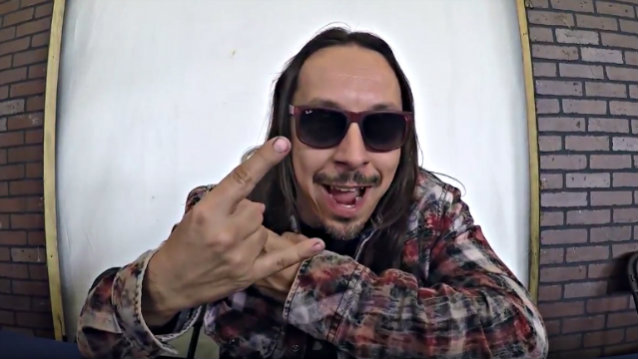 Metal Nexus conducted an interview with LACUNA COIL vocalist Andrea Ferro prior to the band's performance at the Louder Than Life festival, which was held September 30 - October 1 at Champions Park in Louisville, Kentucky. You can watch the full chat below. A few excerpts follow (as transcribed by BLABBERMOUTH.NET):

On the current state of heavy metal:

Andrea: "I think metal today is wider than it has ever been. You can call metal a lot of different things... This festival, you can tell that there's so many different kinds of bands, that they totally belong in one way or another. Sometimes it's a bit more towards the rock music, and sometimes it's a bit towards metal like in our case, but in general, it's such a variety, and it's so much alive, everywhere. We've been touring for this record worldwide... and everywhere, there's people living for metal music, so I think it's as alive as ever."

On the effect of fans gravitating toward streaming:

Andrea: "It's important that you find a way to support the bands. It's hard, because there's so many different [options] every day, and it's easy to get lost in the quantity of bands that are out there. But it's important that you take your time and listen to the stuff. Don't just skip or browse — try to give it a chance. Otherwise, there will never be a band that will have a career anymore. We've become a bigger band when we did our third record, 'Comalies', so it's important that you give bands time to grow up, time to find their own personality."

On whether the band still self-identifies as "gothic":

Andrea: "I think it's an evolution of that. When you think about gothic sometimes, there's a lot of the cliché — like latex, or S&M, that kind of stuff. We definitely embrace gothic, and that's where we come from, and that will always be a strong part of our atmospheres, but I think we've also brought an evolution of it. Obviously, there will always be something that direction, because that's where we come from, that's what we like — but we don't want to follow too much in the cliché. We also want to represent the evolution of it."

On the group's upcoming book that will commemorate its twentieth anniversary:

Andrea: "It's going to be twenty years of our history, plus a lot of pictures, backstage... not so many of the official pictures, because those have been seen already by everybody. Unreleased photos, unreleased stories. It's going to be a really full package. We're still working on it – we're still selecting some of the material. We have so many pictures that we have to scan, and focus, remember who took the pictures, where it was taken, what time it was... but it's going to be very, very special. There's photos of me and Marco [Coti Zelati], the bass player, when we were like 16, 18 years old, [when] we just started to jam with friends."

On their upcoming live DVD shoot:

Andrea: "The live show [will be] really special... with songs we've never played before, songs from the very early releases, and there's going to be interaction with a gothic circus doing stuff while we play. It's going to be special — unique and special."

LACUNA COIL will celebrate the twentieth anniversary of its debut by playing a very special show, dubbed "Nothing Stands In Our Way", on January 19, 2018 at London, England's O2 Shepherd's Bush Empire. It will be a unique extravaganza and truly exceptional event that is not to be missed. The show will be filmed and recorded for a release later in 2018.

LACUNA COIL's first-ever book, also titled "Nothing Stands In Our Way", is scheduled to be published around the world in early 2018. The book is described in a press release as "the full twenty-year story of the Italian gothfathers as told by the band in their own words. Illustrated throughout with rare and candid photographs, memorabilia and personal artefacts, it will see founding members Andrea Ferro, Cristina Scabbia and Marco Coti Zelati sifting through the birth, growth and full flowering of the band to tell twenty years of LACUNA COIL.