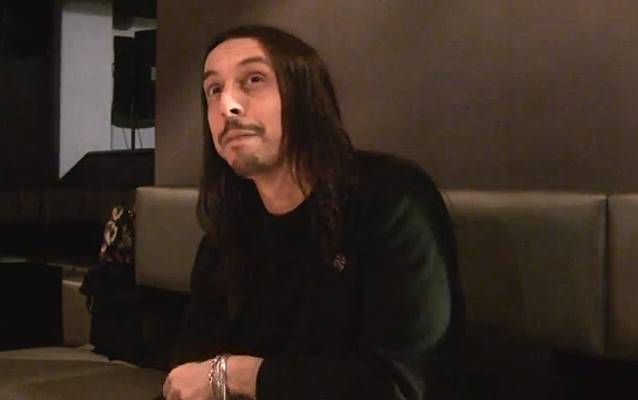 GetYourRockOut conducted an interview with male vocalist Andrea Ferro of Itlaian heavy rockers LACUNA COIL before the band's November 1 concert in Manchester, England. You can now watch the chat below.

Said LACUNA COIL singer Cristina Scabbia: "I am so anxious to hear it mixed and mastered."

Ferro previously stated about the new CD: "We met Jay a few years ago in L.A. and had a really positive feeling about him, as he has produced and mixed some of my favourite records and some very relevant rock/metal albums.

"We have decided to work with him, because he has the ability to work together with the band towards a common vision without driving the band away from their sound.

"We changed producers on our last album, 'Shallow Life', and we wanted to work with Don," Scabbia told KNAC.COM. "I think that we wanted to change producers mainly to see what we could do with a different person. A producer is much like a teacher and we wanted to learn something new and we found that our goals and Don's were much the same. When listening to 'Dark Adrenaline', I can say that there is so much different. We are more experienced now and more confident in our sound and we get inspired to try to do more with each new record."