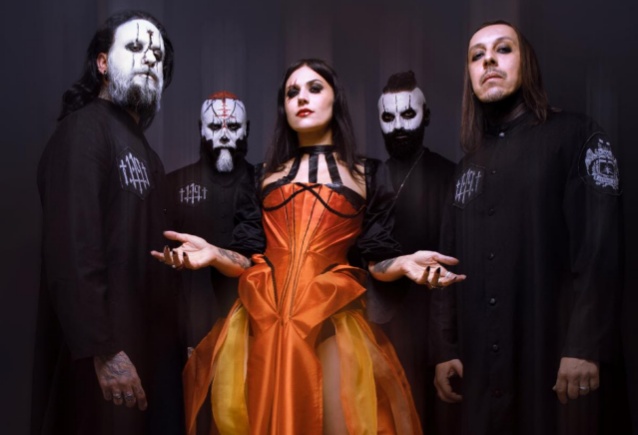 LACUNA COIL's ANDREA FERRO On Downtime During Pandemic: 'It Felt Very Flat And Not Creative At All'

In a new interview with the "Midwest Beatdown" radio show, singer Andrea Ferro of Italian metallers LACUNA COIL spoke about how he and his bandmates dealt with the downtime during the coronavirus pandemic. He said (as transcribed by BLABBERMOUTH.NET): "Especially on the first lockdown, beside the overall situation of people getting sick and dying — that was obviously scary — we felt we were cheating, because we were home, and we'd never been home for such a long time. We didn't even know what to do, because we couldn't even talk to each other unless it was [an online] chat or something like that. So we didn't do any music-related stuff.

"I take care personally of the business side of things, of the company, so I did a little bit of that to save some money here and there, because I didn't know how [the pandemic] was gonna be, and get funds, get money where we could," he continued. "And beside that, I was just playing video games in the beginning, just staying with my wife. It felt almost like a vacation because we were home doing what we like to do. But then, after a while, I started to feel a bit guilty, so I started to pick up the guitar and play guitar a little bit and restart playing and start working on some ideas. But it was feeling very weird; the overall situation, the uncertainty, it felt very flat and not creative at all. So we haven't been able to actually work on proper music on the lockdowns, because we felt empty because we normally get inspired by being on the road, by meeting people and meeting other bands, and that didn't happen for two years. So at the end of the pandemic, all the lockdowns, we felt really flat and we really wanted to restart gaining inspiration."

LACUNA COIL celebrated the 20th anniversary of its third studio album, "Comalies", by performing it in its entirety at a one-night-only concert this past Saturday, October 15 at Fabrique in Milan, Italy.

"Comalies XX", a "deconstructed" and "transported" version of "Comalies", was made available on October 14 via Century Media Records.