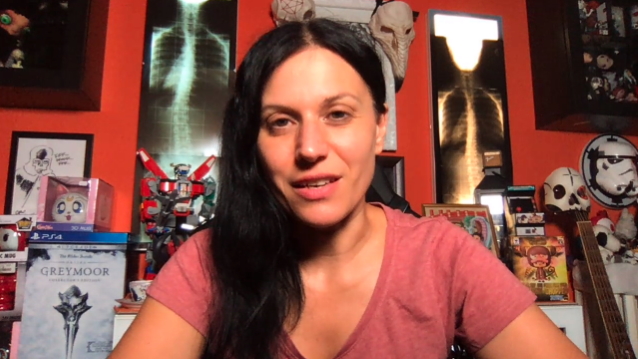 LACUNA COIL singer Cristina Scabbia has blasted people who promote the conspiracy theory that the COVID-19 pandemic is part of a strategy conceived by global elites — such as Bill Gates — to roll out vaccinations with tracking chips that would later be activated by 5G, the technology used by cellular networks.

"Don't get sucked into this stupid, stupid news," Cristina said during a July 14 Twitch chat with her followers. "When we talk about a conspiracy — a conspiracy for what? You tell me, because everyone I talk to online about this so-called conspiracy, they can't give me an explanation. And as per science, if you can't prove it's the way you're saying it, it's not true. So if you're telling me that the 5G is connected to the virus, whatever, you need to prove it in order to say it is like this. And I've heard — trust me — so many stupid things, it's not even funny. I've heard about microchips in masks, and that's why they they want us — 'they'; they who? — want us to wear the masks so they can control us. I mean, I really wonder who is the one… I'm thinking about presidents and whoever is at the highest place, taking care of a state, for example, I wonder what is the good coming out of putting a state on its knees, ruining [it] completely economically, what is the good coming out of it if the state itself then has to try to help every human being living in that territory. It makes no fucking sense."

She continued: "If you're having any doubt about, 'I don't know how the virus started. Maybe they created it in a laboratory,' then I can give you the option of a doubt, because I don't know it either, and we don't know it either. And that's okay — we don't know where it was originated for sure; there are some theories, there are some options. But that is a different thing. But speaking about a conspiracy because they want to control us? That is the stupidest thing that I've heard my whole life — my whole life."

Scabbia also criticized people who refuse to wear a mask in public spaces to protect others from possible infection. The Italian singer addressed the hot-button issue as lawmakers push harder for their constituents to wear face masks to limit the spread of coronavirus. Months after his own advisers recommended it, President Donald Trump finally wore a mask in public last weekend during a visit to wounded service members at Walter Reed National Military Medical Center.

"I'm reading the news and I'm deeply, deeply saddened because I see that some places in North America [are] put on a lockdown again," Cristina said. "And that is because a lot of people are just refusing to wear masks, because they think it's a joke. I see a lot of fear and so many conspiracies going on. And it makes me really, really sad, because you guys know that I've always been respectful towards the law. In this case, I know that it's not just putting on a mask because the law says it — it is because I want to protect myself and the loved ones. So when I read about people going and, even worse, organizing COVID parties — I mean, this is the saddest, most pathetic, most miserable thing I can hear. I mean, someone creating on purpose occasions for infections. And this is so stupid, because it's not only dangerous, but no one thinks about the big picture."

She added: "Everybody feels very unafraid and strong. But if you get infected, it's not just about you, it's about everyone surrounding you. So that means that you're not only very selfish, but you have no heart, because you might be infecting your parents, you might be infecting your grandparents, you might be infecting a friend of yours who has some health problems. So it is very, very, very stupid, and I honestly — I mean, I shouldn't say that — but I despise these stupid people. And I will say it again and again, because they are a disgrace to humanity. In a moment where everybody is trying to cooperate, to work with each other to make it a better world, there is someone who tries everything possible to feel better than the others. There is always that 'I'm better than you, I know more than you do' thing that really, really bothers me and stays under my skin. It makes me mad. It makes me really, really mad."

More than 244,000 people have been infected with the coronavirus in Italy, where LACUNA COIL is based, and more than 35,000 have died.

Lombardy, where LACUNA COIL's hometown of Milan is located, is the worst-affected region in the country and accounts for about half of Italy's deaths from the virus.