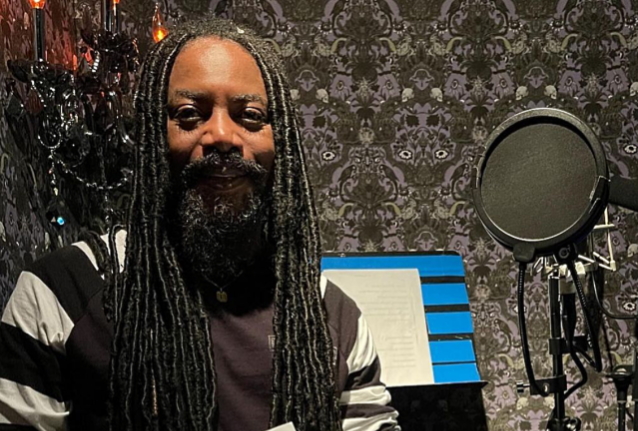 SEVENDUST's Lajon Witherspoon has completed laying down vocals for the band's next studio album. The follow-up to 2020's "Blood & Stone" is once again being tracked at Studio Barbarosa in Gotha, Florida with producer Michael "Elvis" Baskette, who has previously worked with ALTER BRIDGE and SLASH, among others.

Earlier today (Sunday, August 21),Witherspoon shared a few photos from the studio and he included the following message: "Well there ya have it Lead Vocals Done for New @sevendustofficial Done. Thanks to all my Brothers everyone did & Amazing Job @elvisliberace @1f_jef @joshuasaldate waft a team & I Rocked my new good luck shirt for last few tracks @prideofgypsies @harleydavidson can't WaIt for all to hear what a great Recording section I Love y'all thanks so much God Bless everyone".

SEVENDUST's new LP is tentatively due in early 2023.

In late June, SEVENDUST drummer Morgan Rose said that the writing session for the band's upcoming album was his "favorite" of SEVENDUST's career. "Just 5 guys in a farm house, creating," he wrote on Instagram. "Telling each other how much we love each other, supporting each other, enjoying being together. No outsiders, no drama, no bullshit. Just us…. The songs are magical, the vibe of the record is magical, our relationship with each other is magical."

SEVENDUST recently completed two legs of its tour celebrating the 21st anniversary of its "Animosity" album.

Last December, SEVENDUST released a digital expanded edition of "Blood & Stone". "Blood & Stone Deluxe" contained five new tracks, including three never-before-released remixes and two newly recorded songs. Jake Bowen of PERIPHERY, Richard Wicander of FIRE FROM THE GODS and Justin deBlieck, formerly of ICE NINE KILLS, provided remixes and the band finished recording "All I Really Know" and "What You Are" specifically for this release. "Blood & Stone Deluxe" was released via all digital partners via Rise Records.

Also in June, Rose told "The Jasta Show" that SEVENDUST won't hit the road in support of its next studio album until 2023. He also revealed that "there's not gonna be many [tours] left, I'll just tell you that. I'm gonna be the one to let all the cats out of the bag, but I can just tell you that we're not gonna be around, full-fledged, forever, that's for sure," he added cryptically.

This past March, Witherspoon told St. Louis Post-Dispatch that "Blood & Stone" showed SEVENDUST is "still standing the test of time. It was great to do the album with [Baskette] in Florida again. It was a good time. We wanted to hit [listeners] hard and let them know we still got it and that we’re not afraid to put slower songs out there too."

As for the decision to release a "deluxe" version of the LP, Lajon said: "We wanted to put some extra songs out there, B-sides that people hadn't heard. It's a little more of a treat."