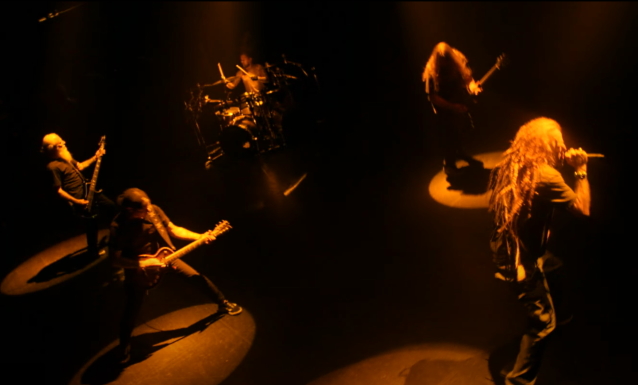 LAMB OF GOD has shared the official music video for the song "Ditch". The track is taken from the band's new album, "Omens", which is being released today (Friday, October 7). The LP is the follow-up to LAMB OF GOD's self-titled album, which arrived in June 2020. That effort marked LAMB OF GOD's first recordings with drummer Art Cruz, who joined the band in July 2019 as the replacement for the group's founding drummer, Chris Adler.

LAMB OF GOD will take part in an exclusive "Omens" in-store band signing at Amoeba in Hollywood, California on Thursday, October 13 starting at 4 p.m. To attend, purchase your copy of "Omens" on CD (deluxe limited edition exclusive softpak CD with alternate cover art and documentary access code) or LP in-store beginning October 7. A free poster will come with purchase — one per customer/while they last.

LAMB OF GOD recently announced "The Making Of: Omens", a short film documenting the recording of their upcoming album. The documentary is available to watch on-demand throughout the month of October at watch.lamb-of-god.com. All physical CD and vinyl copies of "Omens" include a free access code to watch the documentary. The documentary includes four full-song performances recorded in the live room at Henson Studios: "Nevermore", "Omens", "Vanishing" and "Gomorrah".

In August, LAMB OF GOD bassist John Campbell told Germany's EMP that "Omens" is "a fairly dynamic record. There's a few other little surprises and tweaks and things to come in October," he said. "But we recorded it differently this time. We went to Los Angeles and all of us in the same room and same time recording, which gave us some leeway to make changes as things happened and just kind of feel it out in a different way than we've done in the past, which would be everybody kind of going in their corner recording and it gets assembled later. So it was a real team effort on this one, in the recording — all the way through it's been a team effort — and in the recording especially, when we were all in the same room doing that stuff, it was great. I got to spend three and a half weeks working on a record instead of four or five days — working on the recording of the record."