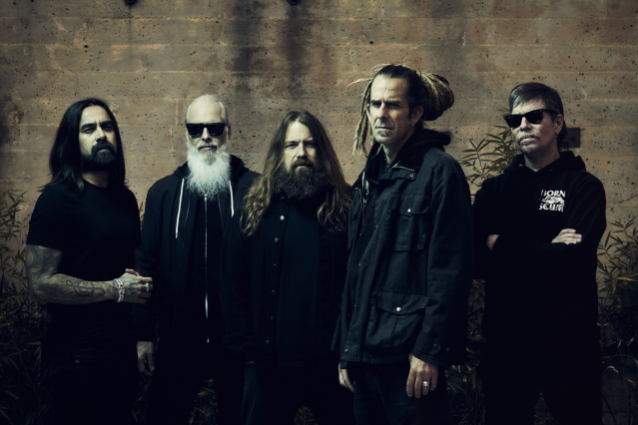 LAMB OF GOD's JOHN CAMPBELL: Drummer ART CRUZ 'Brings A Dynamic To The Band That We Didn't Have Before'

In a new interview with Jessie David of Metal Wani, LAMB OF GOD bassist John Campbell was asked what it has been like playing with the band's drummer, Art Cruz, on 2020's self-titled album and the upcoming "Omens" LP. He responded (as transcribed by BLABBERMOUTH.NET): "It's been amazing. This is the second record with Art. He's been in the band like five years now, so I guess he's got another five more years before he's not the new guy. But it's great. Art is an amazing dude. He has great, positive energy. He's a ferocious drummer. He's got taste and style. It's great playing with him. It brings a dynamic to the band that we didn't have before. His hands are amazing, as well as his feet, and he's just got flavor and style."

Regarding what Cruz's playing style has added to the LAMB OF GOD sound, John said: "I think he brought more of a… 'swing' is the wrong word. [He has] less of a rigid approach to the drums. He came up playing drums and listening to heavy metal by listening to and trying to play with LAMB OF GOD, or trying to play LAMB OF GOD songs. So he's well steeped in it, almost as if he was an understudy before he knew it. So I think he just brings a continuation of what we have done, but with his smoothness, with his feel that is very unique to him."

Campbell added: "I don't know if you follow him on social media, but he posted this amazing video [on Instagram] where in the middle of his playing, he broke his stick, threw it behind him with his right hand from his left hand, threw the stick he had in that hand into his right hand, grabbed a stick out of the stick bag with his left and did not miss a beat the whole time. That was amazing. It's almost like he's doing magic. And ironically enough, he actually does a little bit of magic, so it looked like one of those tricks. He said he had no idea what he was doing. He just broke a stick and needed it and then he went back and looked it and he was, like, 'Holy fuck. How the crap did I do that?'"

Asked if Art having been a fan of LAMB OF GOD prior to joining the band has "lit a fire or a flame underneath" all the other members of the group, John said: "We don't consider enough that the band means a lot to a lot of people. To have him in there helps to underscore that. We've got someone who came in and who appreciates the legacy and is so excited to push forward with new stuff."

Cruz filled in for original LAMB OF GOD drummer Chris Adler on several of the band's tours before being named Adler's official replacement in July 2019.

Art spoke about his contributions to "Omens" — which will arrive on October 7 via Epic Records — during an appearance in June on "The Garza Podcast", hosted by SUICIDE SILENCE guitarist Chris Garza. "The first, self-titled one we did, it was great, man — we wrote some great songs," he said, referring to 2020's "Lamb Of God", which marked his recording debut with LAMB OF GOD. "But I was still learning their vibe. I was green to that level of… Those guys had been doing it for 28, 29 years — almost 30 years — and I'm the new guy, a young kid coming in. You have to go through the trenches in every which way. And that first album was a very secure, safe way for all of us to just, 'Here's the tunes. Let's figure it out. Learn how we work.' And this one that's coming out, 'Omens', they really let me spread my wings and they really let me play me — they let me be me.

"I'm always inspired by LAMB, and LAMB is a signature sound," he continued. "LAMB OF GOD, to me, is that sound as a unit. It's a unit — it's not one individual. It's Randy [Blythe, vocals], it's Mark [Morton, guitar], it's Willie [Adler, guitar], it's John, it's Chris. That's, to me, what LAMB OF GOD was. So I'm not far off from that. That's what inspired me to be listening to metal and shit. It's my favorite metal band of all time. So to take that inspiration and then become my own person, my own player, from WINDS OF PLAGUE to AZUSA to my first band ENTHRAL to PRONG, to finally come to this point, and this is the album. It's all of those bands, it's all of those struggles, all of those trenches, all of those challenges, all of those tours — this is the album that I was able to really… And then the last LAMB OF GOD album, that is what built me to be to this 'Omens' album, for real. And we're just getting started, man — we're so just getting started. And I'm ready. And I'm mentally in a better place to do that, and I'm ready to do it. And the band is, they're my brothers."

LAMB OF GOD has just kicked off a massive Live Nation-produced U.S. headlining tour featuring special guests KILLSWITCH ENGAGE on all dates. Different legs will also see support from BARONESS, MOTIONLESS IN WHITE, SPIRITBOX, ANIMALS AS LEADERS as well as SUICIDE SILENCE and FIT FOR AN AUTOPSY. The tour runs through October 20.