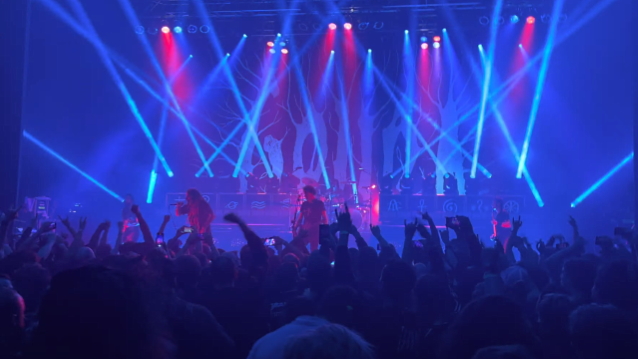 LAMB OF GOD's Randy Blythe joined French progressive metallers GOJIRA on stage last night (Monday, November 1) at Knotfest Iowa at at The National in Richmond, Virginia to perform the song "Adoration For None" live for the first time. Fan-filmed video footage of his appearance can be seen below (courtesy of David Fritzson).

Blythe, who had previously played the track "Backbone" with GOJIRA in late September at Knotfest Iowa, co-wrote and appeared on "Adoration For None" on GOJIRA's 2008 album "The Way Of All Flesh".

Earlier this year, Blythe praised GOJIRA's seventh studio LP, "Fortitude", to Metal Hammer magazine, saying that is "succeeds in achieving what very few metal albums do: without sacrificing a single ounce of earth-shattering heaviness." He added that GOJIRA has once again "raised the bar that defines this genre."

Blythe had previously said that he had "publicly supported [GOJIRA] from the second I first heard them."

"Fortitude" entered Billboard's Top Albums chart at No. 1, while also claiming the No. 1 spot on Billboard's Top Current Albums, Current Rock Albums and Current Hard Music Albums tallies. The release also marked a career high debut on the Billboard 200 for GOJIRA, arriving at No. 12, with several career-high chart positions and Top 10 debuts in countries around the globe including: France (No. 2),United Kingdom (No. 6),Australia (No. 3),Germany (No. 8),Belgium (No. 2),Netherlands (No. 4),Denmark (No. 3),Portugal (No. 4),Finland (No. 2) and Norway (No. 10).