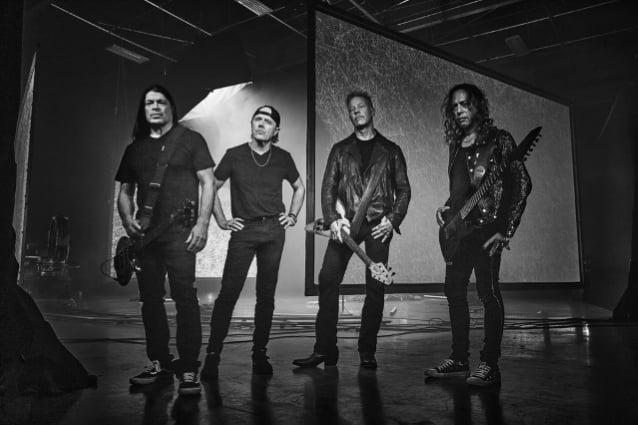 During an appearance this past Monday (November 28) on SiriusXM's "The Howard Stern Show", METALLICA drummer Lars Ulrich discussed his Danish upbringing and how his relationship with his parents has shaped who he is. He said (as transcribed by BLABBERMOUTH.NET): "My dad was a professional tennis player, and he traveled around the world. And my favorite thing, when I was growing up, was to travel with him. So I spent the first six or seven years of my life basically on the tennis tour traveling around and hanging out backstage and locker rooms and on tennis courts. At that time, it was the Rod Lavers and the John Newcombes and the Ken Rosewalls and all those crazy-cool tennis players. And then kind of as my dad got into the later years, being around Jimmy Connors and Guillermo Vilas and Bjorn Borg and some of those guys in the '70s, I thought my dad was the coolest guy in the whole fucking world… I thought my dad was literally superhuman. And I was also an only child.

"When I came to America, when I met James [Hetfield, METALLICA frontman], when I met the other guys in the early years of the band and some of my friends when I landed here, there was that kind of rebellious thing. It was a big part of everybody who was 16 or 17; you were sort of rebelling against your parents. I never had that. I thought my parents were the coolest people in the world. Now, obviously, I've done therapy, and there were some issues, as you do a deeper dive into it… Denmark is a very liberal country, very safe country, so I'd say the flipside of my issues was I often was left alone and [I] may still carry some issues of abandonment. And I think part of the reason that I love being in a band and feel so safe with James, Kirk [Hammett, METALLICA guitarist] and Rob [Trujillo, METALLICA bassist] and the rest of the METALLICA organization is I love being in a collective. They are the brothers I never had. And that safety in numbers.

"I would travel on the tennis tour with my dad, as I started school in Copenhagen," Lars added. "They would write letters to the headmaster, to the principal at school: 'We think it would be great if Lars came and traveled on the tour for a couple of weeks and he would learn some things and we would do homework and all that type of stuff, and follow the school work.' And then I would come home after being gone — and I'm talking, like, fifth grade, sixth grade, seventh grade now. So now I'd come home after being in the U.S. for two or three weeks, or some exotic place, and I remember walking into school and all the kids kind of pointing at me and going, 'Oh, you think you're so cool, traveling around the U.S. with your parents.' And I would get a little bit of that kind of bullying and so on, and some of that stuff definitely lingers for deeper conversations with therapists."

While still living in Denmark as a teenager, Ulrich played tennis professionally and could have gone on to a career as a tennis star, but chose music instead.

METALLICA was formed when Ulrich, who had moved to Los Angeles, placed an ad in a local paper called the Recycler looking for other musicians to play with. The ad was answered by Hetfield and Hugh Tanner of the band LEATHER CHARM.