LED ZEPPELIN, THE WHO, KING CRIMSON Members Are Among U.K. Musicians Calling For Streaming Reform

LED ZEPPELIN's Jimmy Page, Robert Plant and John Paul Jones, THE WHO's Roger Daltrey, and KING CRIMSON legend Robert Fripp are among more than 150 British musicians who are calling on Prime Minister Boris Johnson to update U.K. copyright law to increase revenues from streaming to creators.

In an open letter, from the Musicians' Union in association with the Ivors Academy and the #BrokenRecord campaign, the signatories say that the law around streaming revenues and royalty payments "has not kept up with the pace of technological change" in the music industry. The campaign arrives as the U.K. government is examining the economic impact that music streaming is having on artists, record labels and the wider music industry as part of the "Economics Of Music Streaming" inquiry.

"Streaming is replacing radio so musicians should get the same protection when their work is played on streaming platforms as they get when it's played on radio," Horace Trubridge, general secretary of the Musicians' Union, says. "As the whole world has moved online during the pandemic, musicians who write, record and perform for a living have been let down by a law that simply hasn't kept up with the pace of technological change."

The letter adds that the law has "not kept up with the pace of technological change and, as a result, performers and songwriters do not enjoy the same protections as they do in radio." It goes on to suggest that "only two words need to change in the 1988 Copyright, Designs and Patents Act…so that today's performers receive a share of revenues, just like they enjoy in radio," and that the proposed change "won't cost the taxpayer a penny but will put more money in the pockets of UK taxpayers and raise revenues for public services like the NHS."

Crispin Hunt of the Ivors Academy adds: "In streaming, the song is king, but songwriters and composers do not enjoy the true value of their work and struggle to make a living.

"The record companies are now simply marketing firms. Without manufacturing and distribution costs, their extraordinary profits ought to be shared more equitably with creators.

"Our industry has an unfortunate history of pitching artists, performers and songwriters against each other. With this letter, we are finally speaking with one voice to say 'enough is enough'. Our industry is broken, Government can and should help us fix it."

Read the full letter below. 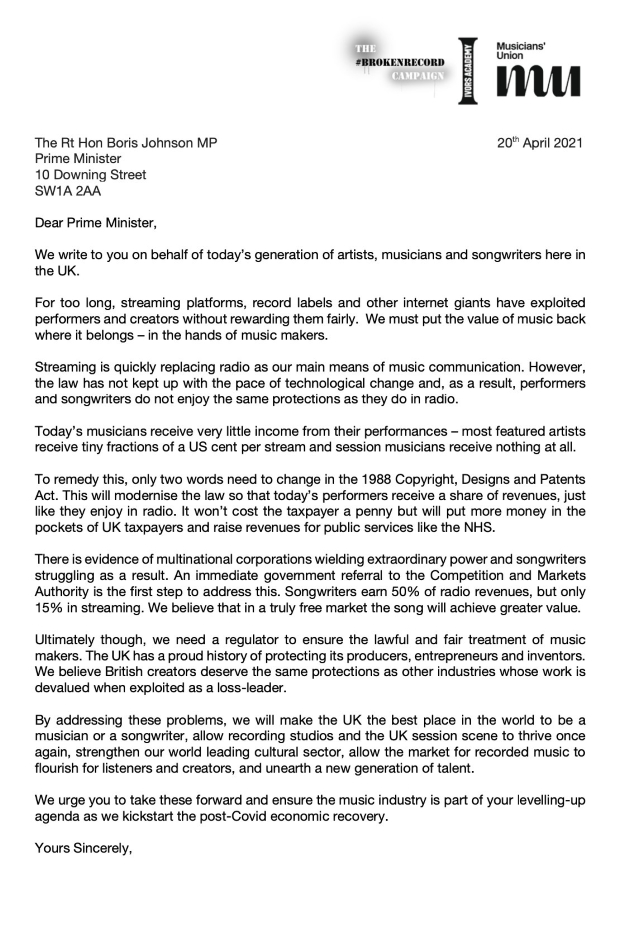