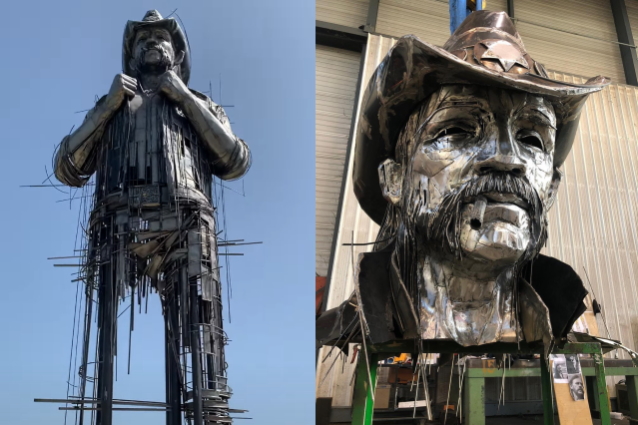 Caroline Brisset, an emerging French sculptor who created the massive new statue of MOTÖRHEAD frontman Ian "Lemmy" Kilmister at this year's Hellfest in Clisson, France, was interviewed on the latest episode of "The Motörcast", the official podcast series celebrating the extraordinary world of MOTÖRHEAD hosted by ACID REIGN frontman-turned-stand-up-comedian Howard H. Smith. You can now listen to the chat below.

Primarily inspired by energy over form and viewing the human as a subject of both fascination and fear, Brisset constructs steel works that marry the concrete and the abstract to achieve a dreamlike effect.

Brisset, who has exhibited her work in France and Belgium, was approached by Hellfest organizer Ben Barbaud last November about creating the Lemmy sculpture and she immediately agreed to get involved.

The official ceremony to recognize this unique memorialization took place on June 23. After the SCORPIONS — whose current lineup includes former MOTÖRHEAD drummer Mikkey Dee — closed the show at Hellfest, Dee and former MOTÖRHEAD guitarist Phil Campbell said a few words, a tribute video to Lemmy was played, and Phil and Mikkey raised a toast to the immortal and eternally popular Kilmister at the monument itself. The ceremony formally recognized Lemmy's love of both the road and the fans, which is where he always felt most comfortable.

Hellfest is an annual open-air festival held in Clisson, and one of the biggest metal festivals in all of Europe.

Lemmy had a portion of his ashes enshrined within the all-new statue, which replaces the previous sculpture of the MÖTÖRHEAD mainman. That statue was erected six years ago but was reportedly falling apart due to the fact that the plaster, of which it was partly composed, was seriously crumbling.