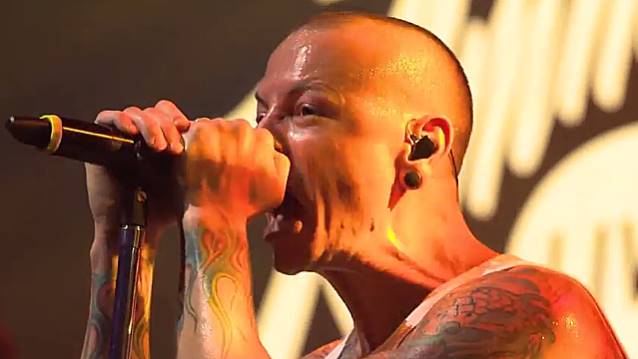 LINKIN PARK was the musical guest on last night's (Thursday, June 19) episode of the ABC late-night talk show "Jimmy Kimmel Live!" The band performed three songs off its new album, "The Hunting Party" — "Until It's Gone", "Wastelands" and "Guilty All The Same" — as part of iHeartRadio's CD-release party, an hour-long set that was streamed online. Check out video footage below.

As previously reported, LINKIN PARK was inducted into the Guitar Center RockWalk in Hollywood, California on Wednesday (June 18). The bandmembers put their handprints in cement next to those of rock legends like Eric Clapton, Jimmy Page, IRON MAIDEN, Carlos Santana, Johnny Cash, VAN HALEN, AC/DC, AEROSMITH and many others. Speaking on behalf of the band at the ceremony, singer Chester Bennington said, "This spot in L.A., this strip of L.A., really means a lot to me. It was the very first place I met these guys."

With the 15th anniversary of the band's debut album, "Hybrid Theory", happening next year, The Pulse Of Radio asked guitarist Brad Delson if the band ever imagined what its success would mean to them. "Well, when we made 'Hybrid Theory', we certainly never expected it to be such a huge commercial success," he said. "Not only did it, you know, connect with people in such a massive way at the time, but it still resonates. It's really surreal and it's certainly a privilege for us to be able to continue to share not only those songs but songs that we've made throughout our whole career with such a dedicated and loyal fan base."

"The Hunting Party" follows up 2012's "Living Things". Guests on the new album include RAGE AGAINST THE MACHINE guitarist Tom Morello, HELMET mainman Page Hamilton, SYSTEM OF A DOWN axeman Daron Malakian and rapper Rakim.

LINKIN PARK will head out this summer with 30 SECONDS TO MARS and AFI on the "Carnivores Tour", which kicks off on August 8 in West Palm Beach, Florida.