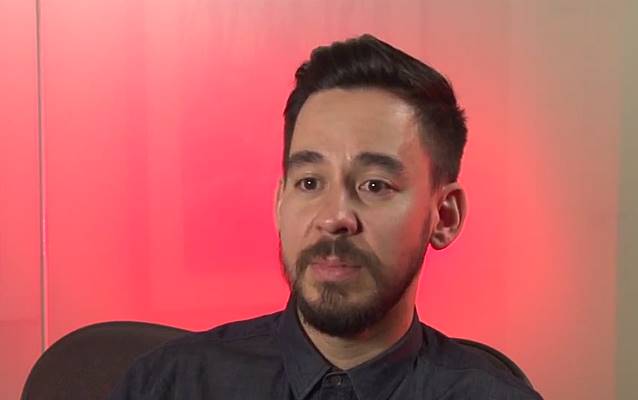 LINKIN PARK's MIKE SHINODA Not Bothered By Missing No. 1 Album With 'The Hunting Party'

LINKIN PARK's new album, "The Hunting Party", debuted at No. 3 on the Billboard album chart in June — the first time since the band's 2000 debut disc, "Hybrid Theory", that the group did not land at the top of the chart in its first week of sales. But in a recent interview with The Pulse Of Radio, frontman Mike Shinoda shrugged it off. "Some friends of mine in the U.S. said, 'Sorry that you guys didn't get to No. 1 on the chart,'" he said. "And I said, you know, I feel like the Billboard chart is for one thing — it's for first-week album sales, and this is not really a first-week album sales kind of album. It's a statement album. It's an album meant to be taken to the stage, and that's exactly what we're planning to do."

"The Hunting Party" sold around 110,000 copies in the United States in its first week of release. The record arrived in stores via Machine Shop Recordings/Warner Bros.

The LINKIN PARK bandmembers, especially Shinoda, have been very vocal about returning to harder-edged rock on this record as a response to the poppier sounds heard on alternative rock radio at the moment. Shinoda explained that he was tired of what he was hearing on the airwaves. "I just couldn't take it," he told The Pulse Of Radio. "I was listening to stuff and I really just was getting frustrated. I was actually listening to my own demos and I wasn't happy with those either. And yeah, there was a point at which we just kind of did an about face and I said to the guys, like, 'I've just kind of scrapped everything that we've been working on, like we can go back to it if we want to, but I made some new things and I think this is the direction for the album.' And that's what I played them."

"The Hunting Party" follows up 2012's "Living Things" and features the singles "Guilty All The Same" and "Until It's Gone".

Guests on "The Hunting Party" include RAGE AGAINST THE MACHINE guitarist Tom Morello, HELMET mainman Page Hamilton, SYSTEM OF A DOWN axeman Daron Malakian and rapper Rakim.

LINKIN PARK is hitting the road this summer with 30 SECONDS TO MARS and AFI on the "Carnivores Tour", which kicked off on August 8 in West Palm Beach, Florida.