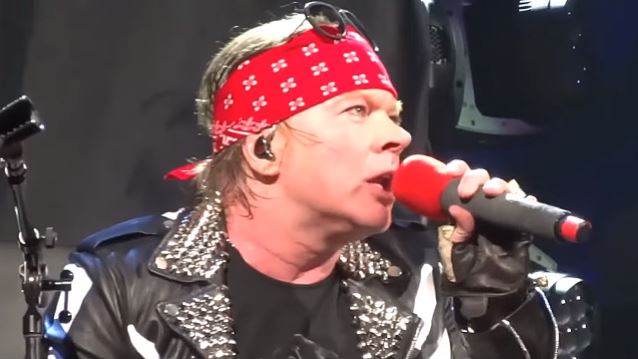 Several fan-recorded audio clips of what appears to be Axl Rose rehearsing with AC/DC in Lisbon, Portugal for the band's May 7 concert in the city can be heard below. The featured songs are "Hells Bells", "Hell Ain't A Bad Place To Be", "Back In Black", "Thunderstruck" and "Shoot To Thrill".

The show is one of twelve European dates AC/DC will perform with the GUNS N' ROSES frontman on lead vocals after Brian Johnson was ordered to stop touring or risk going deaf.

AC/DC's European tour kicks off in Lisbon and runs through June 12 in Aarhus, Denmark. After that, Rose will head out on his previously announced summer reunion tour with GUNS N' ROSES. AC/DC's ten postponed U.S. dates will take place later in the year, also with Rose as frontman.

According to Billboard, Rose met with the members of AC/DC twice in March, in Miami and Atlanta, about doing the shows. Singers from AC/DC tribute acts were also auditioned, and at one point there was talk of having other vocalists alternate with Rose, including ex-SKID ROW frontman Sebastian Bach and Nic Cester of the Australian band JET.

Classic Rock magazine recently posted a story on its web site as to why Axl Rose is the "worst idea" to replace Johnson in AC/DC. Its sister publication, Metal Hammer, has since countered with why it is a "brilliant idea," and here are some of their reasons:

1) "Various singers from bands ranging from KROKUS to THE HIVES have thrown their hat in the ring, but all along, there was only one viable direction, and that was pulling in a high-profile singer who knows the material, who has the range and who's got the time."

2) "Anybody who's watched GUNS N' ROSES' version of 'Whole Lotta Rosie' on YouTube must grudgingly admit that he riotously delivers the punch and snarl of the original. There is no debate that Axl has the style and the range to handle the band's current set list."

3) "Say what you will about Axl, but he's possessed of high intelligence and his own keen survival instinct; he acutely understands that before him lies a once-in-a-lifetime opportunity to elevate his stature among his fans and peers and to carve his name on the wall of the AC/DC legacy for all time. No way will Axl blow this..."

4) "Finally, think about the ticket holders. If you had a ticket to one of these shows and word comes down that the band have hired the guy from KROKUS to front them, are you going to go? But put Axl Rose and now you’ve got something to see."