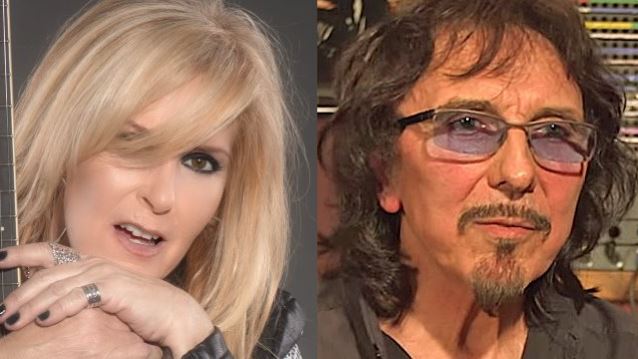 In her new memoir, "Lita Ford - Living Like A Runaway: A Memoir", the former lead guitarist of THE RUNAWAYS opens up about her wild life on the '80s music scene — including dalliances with Jon Bon Jovi, Eddie Van Halen and BLACK SABBATH guitar legend Tony Iommi.

According to the New York Post, Ford writes about her lengthy allegedly abusive relationship with Iommi, which started after she got to open for BLACK SABBATH. "He seemed so charming, confident and handsome," she writes. "I would later find out that looks are deceiving."

Ford's relationship with Iommi allegedly began with a failed attempt at sex as he was "too high" on cocaine. "He was impotent from his constant drug use, and he was very embarrassed. I felt bad for him and didn't really know what to do. Eventually, I got him off," she explains in the book.

As the relationship progressed, Iommi invited Ford to England to meet his "mum." On the flight there, she writes, Iommi "out of nowhere… hauled off and punched me in the eye."

Although she planned to fly right back to Los Angeles when they landed, she decided to stay, she writes, "like a moron," after Iommi acted like nothing had happened.

Lita claims that Iommi physically abused her four or five times during their relationship and describes one particularly scary episode that occurred shortly after the couple got engaged.

"After snorting tons of blow, he got angry and choked me unconscious," she writes. "When I woke up, I saw him holding a chair above my head. It was a big, heavy leather chair with studs around the arms, and he was about to smash it over my face. I rolled over, and luckily I moved fast enough that he missed me and the chair smashed into the ground."

Ford eventually broke up with Iommi, who, she claims, went on to hire her band to work with him instead behind her back.

"Lita Ford - Living Like A Runaway: A Memoir" will be released on February 23 via Dey Street Books (formerly It Books),an imprint of HarperCollins Publishers.