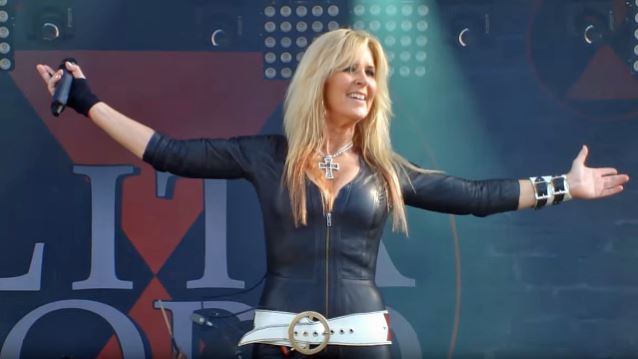 LITA FORD: I Had Affairs With 'A Lot Of Guitar Players And A Lot Of Lead Singers In The Music Industry'

'80s hard rock queen Lita Ford was recently interviewed by Meltdown of Detroit's WRIF 101.1 FM radio station. You can now listen to the chat using the audio player below.

"At the time, it was something that was before its time and hard to put across to people, but now it's spoken about very openly, and I love that," Lita continued. "It should be — it's part of human nature."

Ford also talked about the connection between sex and music, saying: "Rock and roll is so sexual. If you're singing rock and roll, people are just, 'Ah! He's so hot!' 'Well, he's wearing a turtleneck sweater. I don't see what [makes him hot].' Yeah, he's hot. Why? Because he's singing rock and roll."

According to Lita, she and other musicians from the 1980s openly embraced the sex and drugs typically associated with the rock-and-roll lifestyle of the era. "Everybody was just going crazy with the sex," she recalled. "Look at bands like POISON. They would have a room full of girls after the show, and Bret [Michaels] and C.C. [DeVille] and all the guys from POISON, they would just pick a couple of girls — not one; two or three — and they would make the others go back out into the audience, and they would have their way. And the girls loved it; they would have the time of their life. It was just a real crazy time.

Asked if she thinks she ended up hooking up with the rock stars because they had so much in common with her, Lita said: "I think people just naturally do that anyway. If you're in school, you're gonna attract someone who's also in that same school. If you're in a job, if you're working as a doctor, you're probably gonna attract the nurses. If you're an attorney, you're probably gonna attract other female attorneys or male attorneys or the secretaries. It just kind of goes that way. If you're a rock band, you're gonna attract other singers or guitar players. And I did. I had an affair with a lot of guitar players in the music industry and a lot of lead singers in the music industry."

In her 2016 memoir "Living Like A Runaway", Ford opened up about her wild life on the '80s music scene, including dalliances with Jon Bon Jovi, Eddie Van Halen, Nikki Sixx, Richie Sambora and BLACK SABBATH guitar legend Tony Iommi.

Lita recently told KBACK Radio that she is "about halfway through" making the follow-up to 2012's "Living Like A Runaway" album. She is also planning to release a standalone song — a duet and a cover — in July, but she declined to divulge any more.

Ford's last release was 2016's "Time Capsule", a collection of songs that were recorded by Ford in the past, but never before made available.