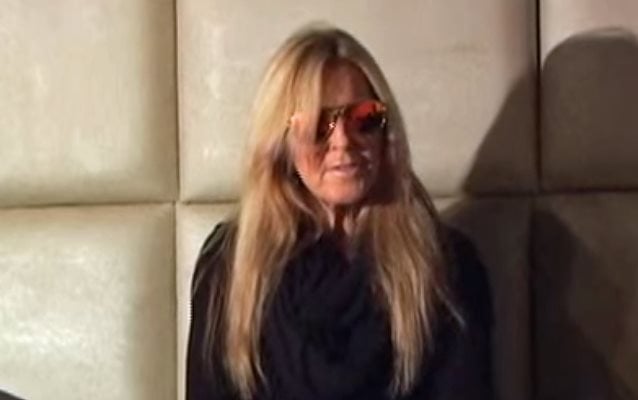 LITA FORD Says Her Ex-Husband 'Brainwashed' Her Against Music

Mike Preston of Psycho Babble TV conducted an interview with '80s hard rock queen Lita Ford on January 7 at the Rock 'N' Revolt festival in Arlington Heights, Illinois. You can watch the full chat below. A few excerpts follow (transcribed by BLABBERMOUTH.NET).

On whether she's heard back from any old friends or lovers after the release of her book "Living Like A Runaway: A Memoir":

Lita: "No, actually. I have not. Nobody was married; nobody had children…"

On Ozzy Osbourne not remembering her name after they recorded their hit 1988 duet, "Close My Eyes Forever":

Lita: "It was a really bad time in his life for drugs. We all know Ozzy's done drugs, right? But, this time in particular was one of the worst times of his life. He had choked and apparently, Sharon [Osbourne, Ozzy's wife and manager] was dead. She was clinically dead. Her heart stopped. She pressed charges on him and they put him in jail, then he had to go to rehab. She's managing me at the same time, so, obviously, it will affect my career as his career, and it did. But, a lot of stuff came out during that time that I don't think she was aware of. She may have thought I was one of those girls he was having sex with, and I wasn't."

On learning to play guitar and sing at the same time:

Lita: "I had to really plan it out. There was not a female who could play guitar and sing. One in the world didn't exist, and I thought, 'I'm going to be that one. I'm going to do this.' I got a job, so I didn't have to go 'Mom, can I have $200 to pay rent for storage up the street for my Marshalls?' I had storage money and was able to set up a PA system, and I cranked that Marshall and sang to my favorite songs every day. Then I pictured an audience and trying to learn how to be a frontwoman at the same time. So, after a couple of years of trying to reinvent myself, I did put together a three-piece band and the first album was signed instantly, 'Out For Blood'."

On her recent "Time Capsule" album:

Lita: "They are gems, they really are. These were songs that I had produced, and the only reason they never made it on a record was because I had produced them. The label did not want the artist, particularly, a female, producing her own stuff. And I killed these songs; I kicked ass. We killed them. The producer, the engineer, George Tutko, worked well with me, so the two of us worked as producer and engineer, we made this album come to life with all these wonderful celebrities. The songs are wonderful."

On whether she gets any satisfaction knowing she's lasted so long in the music industry:

Lita: "I don't know. They had some issues within the company [RCA], right at the height of my career. I don't know why they always got to pick the height of my career to have problems. [Label president] Bob Buziak, who had given me his support at the label to have money to do videos, have money for tour buses, have money for whatever I wanted to do, and they paid him off and pushed him out of the company, and he was gone. Next thing I know, people are closing doors in my face at the label. Bob's not here anymore…it's not like they didn't like me. They liked me. The new president, Joe Galante, he actually wrote me a letter in his own handwriting on his own stationary, and it said 'You are one kick-ass lady. However, I don't know what to do with you.' At this point, I was nominated for a Grammy for 'Playing With Fire'. Nominated for a Grammy. And they dropped me."

On whether she reads Internet commentary about her:

On how her guitar playing has progressed over the years:

Lita: "It's hard to explain, but when I was married for 16 years with my ex, he actually — and I don't talk about this and it's one thing in the book that comes up in [the chapter] 'Roadblock' — he brainwashed me against music. He didn't want me listening to music. He has a jealousy problem, and he wanted me there for him and that's it. He didn't want anyone calling me 'Lita Ford.' Had they mentioned 'Ford'… oh my God. Anyway, a lot of it messed with my head. I was post-traumatic stress when I came out of that relationship, and I had to re-learn a lot of things. How did I run around the stage and play guitar like that?"

Ford recently confirmed that she is about to begin work on a new studio album, to be released later in the year. Helming the project once again is guitarist/producer Gary Hoey, who previously worked with Lita on 2012's "Living Like A Runaway" disc.

Ford's last release was 2016's "Time Capsule", a collection of songs that were recorded by Lita in the past, but never before made available. "Time Capsule" was tracked after her 1988 "Lita" album — a time when, as Ford put it, "we had a break between recordings and it seemed so many of us were always in the same place, at the same time." Some of the album's featured guests: Billy Sheehan (bass),Rodger Carter (drums),Dave Navarro (mandolin),Jeff Scott Soto (vocals),Rick Nielsen and Robin Zander (backing vocals) and Gene Simmons (bass).