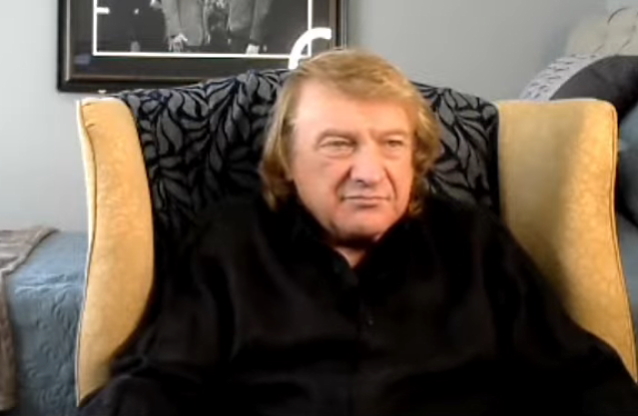 Original FOREIGNER singer Lou Gramm says that there might be a "more personal" reason his former band has not yet been inducted into the Rock And Roll Hall Of Fame.

Artists are eligible for the Rock And Roll Hall Of Fame 25 years after the release of their first album or single. Criteria for inclusion includes "the influence and significance of the artist's contributions to the development and perpetuation of rock and roll."

Eligible since 2002, FOREIGNER has had a huge number of rock hits, including "Cold As Ice", "Double Vision", "Hot Blooded", "I Want To Know What Love Is", "Juke Box Hero" and "Urgent", and has been nominated for three Grammy Awards, with no wins.

Asked in a new interview with Sleeve Saturday why he thinks FOREIGNER has yet to get the Rock Hall nod, Gramm said: "I think it's less about whether we're qualified and I think it might be more personal now. I know that at some point when a lot of our compatriots were being nominated and accepted into it, the bands and the artists that came up when we came up that were inducted into the Rock Hall Of Fame and we were left out, I believe that our manager at that time and Mick [Jones, FOREIGNER's founding guitarist] went to see the head of the Rock Hall Of Fame and had a discussion with him which led to some heated words. And as that discussion ended — I don't know who; it might have been Jann Wenner from Rolling Stone magazine, who actually was a very good friend of Mick's, I think he told Mick and our manager that it'll be a cold day in hell before FOREIGNER gets in the Rock Hall Of Fame. That's the way it ended up. And sure enough, I bet you 20 years has gone by since that."

Four years ago, Jones was asked by Tigman of the Q103 radio station in Albany if it means anything to him to get inducted into the Rock Hall. Jones responded: "Well, let's say it's not something I wrestle with or something that affects my life. Of course, it would be nice, but sometimes you wonder if it's a political thing more than a musical [thing] or [anything to do with] achievement. Because as far as achievements, we've certainly achieved a tremendous amount with the band. And we'll see. I guess someday. Who knows?"

The 72-year-old Gramm left FOREIGNER for good in 2002 and has battled health issues in recent years, including the removal of a non-cancerous tumor. He told the Democrat & Chronicle in 2018 that he was planning to retire, but still reunited with FOREIGNER for several shows that year to celebrate the band's 40th anniversary.

FOREIGNER replaced Gramm with Kelly Hansen in 2005. Jones, the only remaining original member of FOREIGNER, suffered from some health issues beginning in 2011, eventually resulting in heart surgery in 2012.

FOREIGNER's last album, "Can't Slow Down", was the only full-length collection of new songs to have been released by the band since Hansen took over vocals. The album entered the Billboard Top 30, driven by the radio singles "In Pieces" and "When It Comes To Love". The band also has released a series of live albums and compilations, including 2016's "In Concert: Unplugged" and 2017's "40".