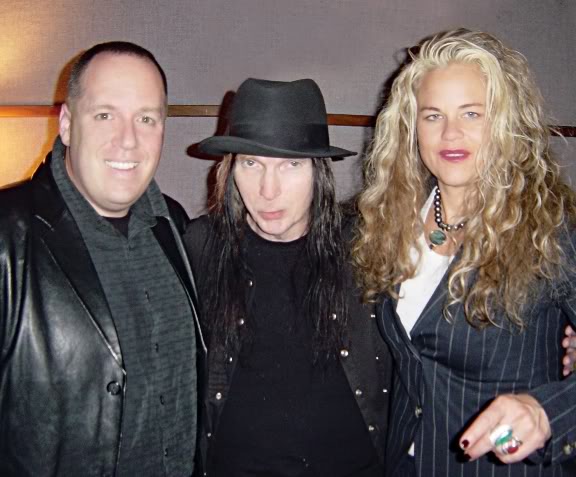 Cherry Lane Music Publishing Company, Inc., whose roster includes songwriters such as QUINCY JONES, JOHN LEGEND, WOLFMOTHER, and WILL.I.AM, has announced the signing of one of history’s original rock stars, Mick Mars of MÖTLEY CRÜE. Mars, the guitarist and co-songwriter of the band, had been previously administered by Warner Chappell for over 20 years.

In announcing the signing, Richard Stumpf, SVP of Creative Services & Marketing at Cherry Lane, noted, "It is a rare opportunity to work with someone of Mick Mars' caliber whose legendary hits have literally defined a generation. In talking to Mick, he made clear to me his interest in writing with other songwriters beyond his brothers in MÖTLEY CRÜE and I was extremely impressed by his eclectic songwriting styles. His history and talent will have a profound effect on new up-and-coming songwriters and recording artists. We already have him collaborating with some of our songwriter artists and we have lots of other sessions in the works. Soon Mick will be thought of as not only one of the legends from MÖTLEY CRÜE, but also as one of today's key songwriting collaborators."

The deal was negotiated by Stumpf and Keith Hauprich, VP of Business and Legal Affairs, from Cherry Lane and Dina LaPolt from LaPolt Law, P.C.

"Mick instantly connected with Cherry Lane and their pro-active approach to collaborative songwriting," states attorney Dina LaPolt, who represents Mars and who was responsible for brokering the deal. Mars' agreement with Warner Chappell terminated on July 1, 2006. Mars adds, "What excited me the most about Cherry Lane is that they were really interested in all the other types of songs that I write besides the traditional MÖTLEY CRÜE-type songs. I am really very thrilled with all that they are doing."

MÖTLEY CRÜE reunited from a six-year absence in 2004 with the release of their most current greatest hits compilation album, "Red, White & Crüe" which also contained three new studio recordings, including the radio hit "If I Die Tomorrow". Simultaneously with the album’s release, the band embarked on a limited U.S. tour and the reaction to their reunion was enormous. The reaction kicked off an even bigger U.S. and European tour called the Carnival of Sins Tour which was deemed one of the most successful tours by an American rock band in 2005. The success of the tour also produced a live CD and DVD combination of the same name.

MÖTLEY CRÜE manager, Allen Kovac from 10th Street Entertainment, comments, "Mick has written and performed some of the most memorable riffs and solos in rock. He is truly a crown jewel in the world of guitarist."

The official MÖTLEY CRÜE autobiography, entitled "The Dirt", was published by Regan Books/Harper Collins in 2001 and is currently being developed into a major motion picture with Paramount Pictures. Mick Mars is an executive producer on the film along with his bandmates Nikki Sixx, Tommy Lee, and Vince Neil. Tentative plans include the band touring Europe this summer.

Mick Mars' signature guitar sound has become a staple of American music and Mars has been deemed one of the world's greatest guitar players from critics around the globe to many recording artists and musicians who credit Mars as an influence, which include such notables as Slash, Joe Perry from AEROSMITH, Carmine Apice, Alice Cooper, BUCKCHERRY, and Marilyn Manson, just to name a few.