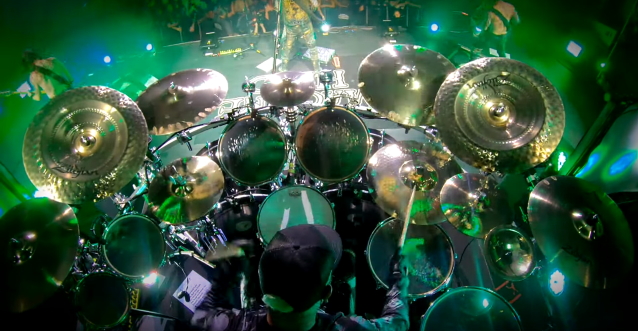 Drum-cam video of MACHINE HEAD drummer Chris Kontos performing the song "A Thousand Lies" with his bandmates on February 21 at Fox Theater in Oakland, California can be seen below.

The North American leg of MACHINE HEAD's 25th-anniversary tour for the band's debut album, "Burn My Eyes", kicked off in Phoenix on January 16 and wrapped up on February 22 at the House Of Blues in Anaheim, California. Each show on the trek consisted of two parts: part one saw frontman Robb Flynn and bassist Jared MacEachern performing alongside new recruits, Polish guitarist Wacław "Vogg" Kiełtyka (DECAPITATED) and British drummer Matt Alston (DEVILMENT, EASTERN FRONT); while part two features "Burn My Eyes" played in its entirety for the first time ever, with original drummer Kontos and guitarist Logan Mader joining in.