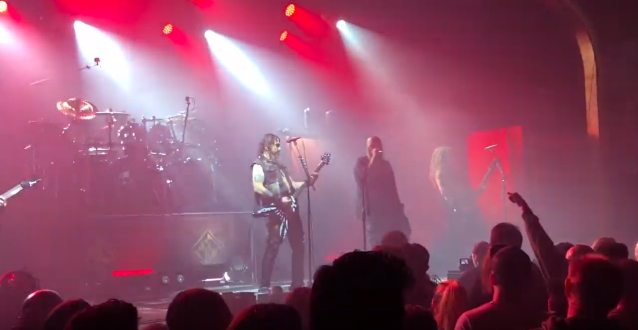 Former EXODUS singer Rob Dukes joined MACHINE HEAD on stage last night (Thursday, January 16) at Van Buren in Phoenix, Arizona to perform the EXODUS classic "A Lesson In Violence". Fan-filmed video footage of his appearance can be seen below.

In a January 2019 interview with Psychology Today, Dukes talked about his 2014 dismissal from EXODUS and the return of his predecessor, Steve "Zetro" Souza. Rob, who fronted EXODUS for nine years, believed that the move was a business decision that enabled the band to play shows for more money with a "classic" lineup.

"I think towards the end, it became about business," Dukes said. "And the business aspect got in the way of friendship… I took it personal. I didn't really give a fuck about the business aspect… I don't care about the money. I just wanted to play. I missed the camaraderie. I missed the nights on the bus driving from Spain to Italy. And me and Lee [Altus, guitar] and some of the boys just hanging out late and bullshitting and talking and listening to BLACK SABBATH and arguing about who was the best hockey players."

Three years after he was fired from EXODUS, Dukes performed with the band during its July 2017 concert in San Francisco, California. He sang several songs with the group on the second of EXODUS's two-night stint at The Chapel in what marked the band's first headlining Bay Area club shows since late 2013.

Dukes currently resides in Arizona, where he reportedly works as a mechanic specializing in car restoration.