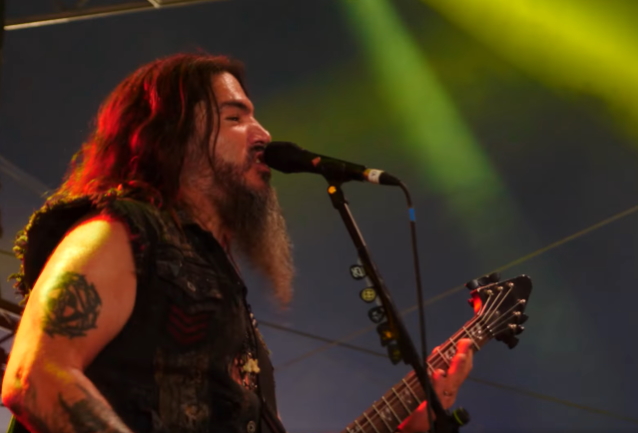 Earlier today (Friday, August 12), three members of MACHINE HEAD — frontman Robb Flynn, bassist Jared MacEachern and drummer Matt Alston — who are in the U.K. rehearsing for their upcoming European tour, played a secret mid-afternoon set on the Sophie Lancaster Stage at the long-running festival. Polish guitarist Wacław "Vogg" Kiełtyka couldn't join MACHINE HEAD at the show because he was scheduled to perform with DECAPITATED at Czech Republic's Brutal Assault festival the same day.

MACHINE HEAD's setlist included one song from the band's upcoming album, "Of Kingdom And Crown", which will be released on August 26 via Nuclear Blast/Imperium Recordings.

Back in 2018, Flynn told U.K.'s Independent that he "hated" playing festivals. "The last festival we ever did I just wanted to get offstage as soon as possible," he explained at the time. "It was pouring with rain, I was freezing my fucking ass off, there's water getting in all our gear, everybody's there in their parkas standing in a foot of fucking mud and I'm just thinking, 'When did metal become this?' It sucks for us and it sucks for the people standing out there watching us. Don't get me wrong, there are some great festivals out there that create their own culture and their own vibe and I love that. But there's a lot of festivals out there that are just thrown-together bullshit and you can't afford to not do those ones when you're out on the circuit; that's the shit that grinds you down."

According to Flynn, he "just didn't feel any connection with the people" MACHINE HEAD was playing to on the festival circuit. "We've done festivals for 23 years but we got to a point where we had to try something else," he told Independent four years ago. "Just because it worked for us 15 years ago or 10 years ago or even 5 years ago, it doesn't mean it's going to work for us now. Everything's changing at such a rapid pace; I've been in the music business for 32 years and I've never seen as much change as we've had in these last five years. I'm not saying it's a bad thing, I'm not saying it's a good thing but it is what it is and we've got to constantly re-evaluate and ask ourselves what's right for us. Believe me, we're making way less money and we're playing to way less people than we would be if we were playing a festival, but if that connection between us and our audience isn't there, then there's no point in us even being there. We might be playing to 3,000 people instead of 30,000 but those 3,000 people are losing their fucking minds and I feel this unbelievable bond when that happens. That's the sole reason why I do this, to feel that connection and that sense of release that unites us all."