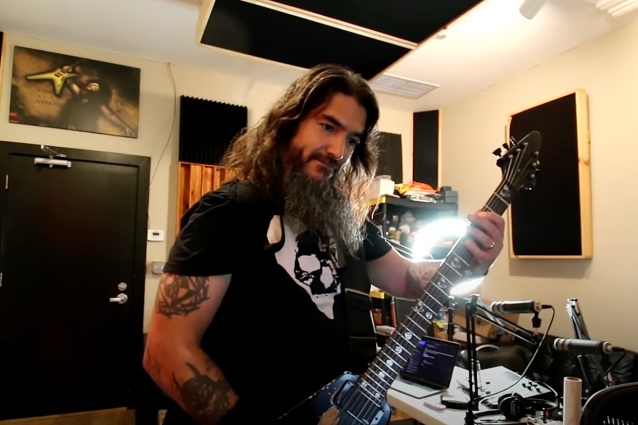 The first in a series of videos documenting the making of MACHINE HEAD's as-yet-untitled tenth studio album can be seen below.

Back in June 2021, MACHINE HEAD frontman Robb Flynn and bassist Jared MacEachern entered Sharkbite Studios in Oakland, California with producer Zack Ohren to demo some new ideas for the band's follow-up to 2018's "Catharsis". With not a whole lot to track, things were off to a slow start, but eventually ideas started to flow.

MACHINE HEAD's next LP is tentatively due in the summer. Last month, Flynn offered an update on the album's progress during an episode of his "No Fuckin' Regrets With Robb Flynn" podcast. He said: "I'm in the studio right now. In fact, we started yesterday — Zack and I were in the recording studio finishing up the new album, working on the new album. It's coming along. Right now, they're setting up in there. They've got Navene Koperweis [of] ENTHEOS, ANIMALS AS LEADERS and a million other bands — he is setting up drums and he's gonna be laying down some heat with the drums. Yeah, it's going really good — [it's] been really, really productive. And we're kind of getting towards the end here, man — we're getting towards the finish line. The finish line is in sight, and I haven't been able to say that for a long time."

He continued: "If you recall, Navene is the dude who played on '[Become The] Firestorm', 'Arrows In Words From The Sky', 'My Hands Are Empty', he played on 'Circle The Drain'. Yeah, it's comfortable. [He's] a local guy, which really helps.

"We're probably gonna be dropping some new songs pretty soon," Robb added. "Then the record will be dropping probably end of summer. We've gotta wait till the vinyl all lines up 'cause the vinyl takes fucking forever now. Nine-month lead time on vinyl. Adele just shifted 130 thousand copies of vinyl first week. Dude, it's crazy. All these fucking major labels are clogging up all of the vinyl pressing plants now. So, yeah, it's been a challenge. But we'll be dropping some songs on the DSPs, digital service providers."

Flynn and MacEachern previously said that they were "making great progress on at least six different new songs, including a 10-minute-plus epic."

According to Flynn, all three tracks from "Arrows In Words From The Sky" single — "Become The Firestorm", "Rotten" and the title track — as well as "My Hands Are Empty", will be included on the band's next full-length studio album. "And the other stuff is just gonna stay kind of in whatever void it came out in — and probably be released on a collection of songs with a bunch of other B-sides at some point, a physical version," he told the "Behind The Vinyl" podcast last June. "But for now, these four songs, and then some future songs, are gonna make up the next record."

Asked if the "turbulent" nature of the last couple of years was a good thing for him creatively, Flynn said: "Oh, totally. I'm an impatient man. [Laughs] I want it, and I want it now. And the music business can be mind-numbingly slow at times. And certainly with the pandemic now, just the lead time to set up a record is, like, seven months. Vinyl is fucking seven months. If I turned in a record today — done, mastered, finished, artwork, everything — we're not gonna get the vinyl until seven months from now. I'm, like, 'This is fucking crazy.' And I don't wanna wait; I just wanna put it out.

"When I started in the [1980s] thrash scene, bands put out demos and fucking rehearsals and new songs every month or two," he explained. "I had every EXODUS song released just from bootlegs and from demos and stuff like that. Same with METALLICA. And it was just so much faster. And the world has just kind of shifted into this extremely slow — certainly the metal world has. And I wanted to bring it back to that… Yes, I'm not releasing a cassette tape, but yeah, I'm putting it out so that if the diehards wanna hear it, you can fucking hear it. And consistently do that — consistently put out music so that it's constantly giving the fans, the diehard fans, the Head Cases, the ones who fucking live and breathe this shit, something to chew on every three or four months. And I really dig it. I think it's amazing. And I think that we have the technology — thanks to Spotify and all the streaming services now — [so that] we can do this shit. So why not?"

Seven months ago, MACHINE HEAD announced that it was abandoning plans to resume its "Burn My Eyes" 25th-anniversary tour now that the pandemic is slowing down. Flynn said that the "Burn My Eyes" tour, which saw him and MacEachern play the band's classic debut album in its entirety for the first time ever, with original "Burn My Eyes"-era drummer Chris Kontos and Mader joining in, would not pick up at such a time as MACHINE HEAD can continue touring. Flynn also confirmed that MacEachern is still a member of MACHINE HEAD alongside new recruits, guitarist Wacław "Vogg" Kiełtyka (DECAPITATED) and British drummer Matt Alston.