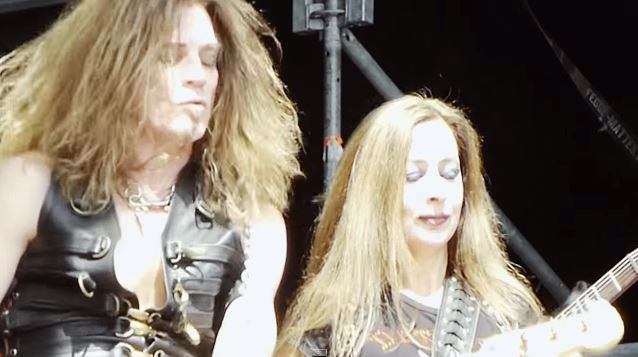 "Another '80s Rock Song", the new video from MADAM X, can be seen below.

Originally signed in '84 to Jet Records by none other than the inimitable "Godfather" Don Arden (father to Sharon Osbourne, wife and manager of Ozzy Osbourne),MADAM X recorded "We Reserve The Right" guided by producer Rick Derringer ("Rock & Roll Hoochie Koo", Edgar Winter, Alice Cooper, Cyndi Lauper). With several U.S. and UK tours, two MTV videos, recording, etc. to their credit, the band's obvious internal fraying, '80s excess and egos finally led to a parting of ways for MADAM X, even as Jet met its own demise. However, with an almost cult-like following the fans have remained loyal, gathering momentum over the years with a new generation's appetite for glam-slam metal all the while still buying re-released copies of "We Reserve The Right".

In 2014, the reunion that was 25 years in the making happened before 12,000+ of the loudest, most loyal MADAM X fans in the world: Sweden Rock Festival. Festival organizers believed and fans from the world over screamed their welcome back by chanting lyrics to both old and new MADAM X metal anthems. Reviewers have raved, with fans worldwide demanding more shows featuring the uniquely balanced, inexorable male/female four-plex assault on your eyes and ears that only this original foursome called MADAM X can deliver up.

MADAM X is ready to unleash new music, beginning with their new single "Another '80s Rock Song", and a new, full-length album, expected in early 2015.