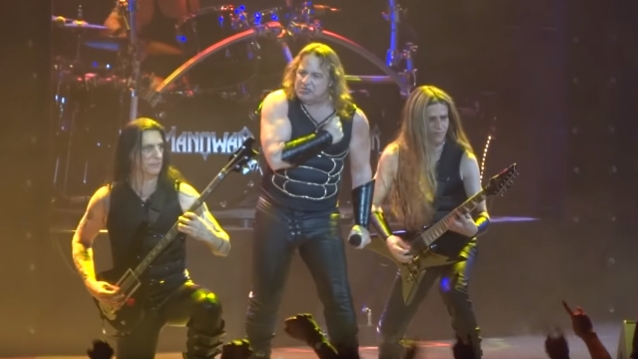 MANOWAR To Release 'The Final Battle' Trilogy Of EPs; Part One Due In May

MANOWAR has confirmed the impending release of "The Final Battle I", an EP comprised of eagerly awaited brand new material. Fans will first get their chance to own this initial instalment in a trilogy of thunderous EPs in an exclusive pre-sale at the merchandise booth of the band's "The Final Battle World Tour 2019", starting with MANOWAR's show in Frankfurt, Germany on March 29. An exclusive digital presale period will start on iTunes the same day. The rollout will then continue into retail and online stores on May 30 and digitally on Amazon and Google Play.

The first of three parts which will constitute the highly anticipated new MANOWAR album, this EP is "destined to go down in heavy metal history as one of the most insanely epic releases of all time," according to a press release. "An imperious demonstration of the band's undisputed mastery of both skull-crushing metal anthems and extraordinary feats of symphonic bombast, these four new molten metal tracks have been inspired by MANOWAR's 'The Final Battle World Tour' and fuelled by the support and energy of their fans. All music was conceived, recorded and mixed at MANOWAR's very own Valhalla Studios, utilizing the unparalleled power of their PMC statement monitors with over 27,000 watts of ground-shaking clarity."

Says MANOWAR bassist and leader Joey DeMaio: "The sheer power of these four songs is mind-blowing! We simply couldn't release more songs at one time; it's just too much. We want to give our fans the chance to take in every note, every word. Gain more strength from this experience and then be ready for the battles they fight every day. And join us on the road, on 'The Final Battle'!"

"The Final Battle I" covers a vast amount of musical ground in its quest to deliver the ultimate heavy metal experience. The opener, the epic fantasy-brought-to-life "March Of The Heroes Into Valhalla" reimagines MANOWAR's music in vivid, cinematic form, providing a deeply moving journey through the warrior's life, from bloody battles to ascension into Valhalla. The battle-filled mood continues with the spine-shattering might and fury of the new anthem "Blood And Steel". Next is "Sword Of The Highlands", one of the most explosive and dramatic songs DeMaio has ever penned: a profound and stirring tribute to heroes long perished, it begins with exquisite elegance before erupting into a grand crescendo of power and glory, exemplified by a possible career best vocal performance from the ever-impressive Eric Adams. Finally, the most startling surprise arrives in the dark, lurking, brutal and merciless form of "You Shall Die Before I Die"; a hypnotic and coruscating epic that delivers a vengeful statement of intent and invincibility… with lead vocals by DeMaio himself.

"The Final Battle I" comes with a crushing new artwork by iconic fantasy artist Ken Kelly, masterfully echoing the emotional roller coaster you'll be taken on.

Parts II and III of the trilogy will arrive in course, inspired by MANOWAR's adventures on the remainder of "The Final Battle World Tour".