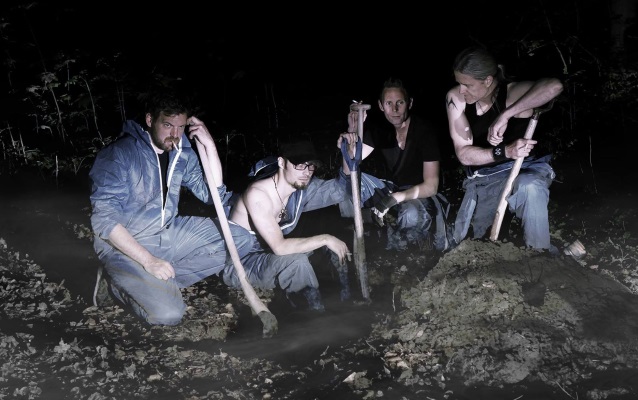 MANTICORA Signs With VICISOLUM RECORDS; New Album Due In April

Danish thrash/power metallers MANTICORA have inked a deal with ViciSolum Records for the release of their upcoming eighth and ninth albums — the first material from the band in almost eight years.

The two albums, which are a part of a grandiose concept based on the thriller/horror novel that lead singer Lars F. Larsen has written, will be released as two separate albums one year apart. The novel itself is scheduled for an April 2018 release, followed by the first album during the summer 2018. Futhermore, the plan is to release the album in small droplets — one song at the time.

Guitarist Kristian Larsen comments: "It's really cool to sign with a label who's actually doing something for the bands they are signing, be it promotion, advertisement and/or active hard work. We'll be labelmates with our good friends from PERSEFONE and LOCH VOSTOK. What else does a metal musician need?"

The music will be recorded and mixed at Hansen Studios with producer Jacob Hansen (VOLBEAT, DESTRUCTION) who also helmed the first two MANTICORA albums back in the last millenium, and vocals will be recorded with Tommy Hansen at Jailhouse studios (HELLOWEEN, BEYOND TWILIGHT, JORN). Tommy previously produced five albums for the band.

MANTICORA has written more than 20 tracks for the upcoming releases, which sees a return to the concept-album style that the band pursued on four previous albums. The concept is based on the band's original novel "To Kill To Live To Kill", which is a horror/thriller story but with a twist of extreme lunacy and horrid scenes of violence. Think "Saw" meets "American Psycho".

MANTICORA has released seven critically acclaimed albums since 1999 and toured numerous times around Europe as well as in the U.S. and played at prestigious festivals, such as Wacken Open Air, Sweden Rock Festival and ProgPower USA.