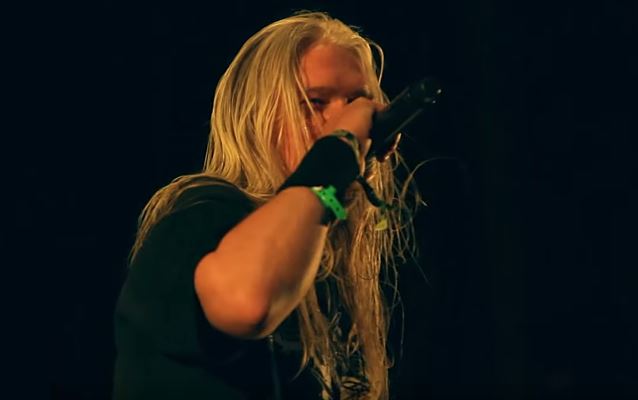 MARTIN VAN DRUNEN On Split With HAIL Of BULLETS: 'I Was Absolutely Not Happy Anymore'

Martin Van Drunen (PESTILENCE, ASPHYX) has broken his silence about his departure from Dutch death metallers HAIL OF BULLETS, saying that he was "absolutely not happy anymore in the band."

Van Drunen's exit from HAIL OF BULLETS was announced in November 2015. The remaining members of the group stated at the time that it was "no longer possible for us to continue the cooperation with Martin." They added that "the main reason for starting this band eight years ago was our mutual love for real death metal and to have fun playing our favorite kind of music and we did not want to lose this 'fun' part."

In a brand new interview with GoetiaMedia.com, Van Drunen said about his split with HAIL OF BULLETS (hear audio below): "The thing is just that there was some tension about certain things that I disliked. And, well, they… it seemed that they didn't care what I had on my mind, and so one night, I had a few beers and I just sent a mail that was not very nice with the words that I was using. It was really insulting. And it was not the first time that it happened, but it was just because I was completely frustrated about certain bandmembers who were not listening to what I had to say. And they'd been doing that for years, so I was, like, 'Okay, now I'm just fed up with it,' and, yeah, an angry mail came from my side, which they didn't like. And then, of course, because Paul [Baayens, guitar] is with me in ASPHYX, he contacted me and said, 'Hey, Martin, it's really serious. Are you sure you're gonna do something about it so that the band can stay together?' And I said, 'No. I'm not going to. What do you want me to do? You want me to say I'm sorry? I said, no, I'm not going to. Okay. So if it's going to be this way, it's going to be this way, but I'm not gonna give in.' So, yeah, in the end, they said, 'Okay, we'll continue and we decided not to continue with you anymore.' And I go, 'Okay. So be it.' And normally, that's absolutely against my nature. If I feel that Im regarded [in a] disrespectful [way], which it was that way too, then I fight the decision. But this time, I was, like, 'Okay, it's all right.' I couldn't be bothered anymore. So that means also, unconsciously, I was absolutely not happy anymore in the band, for myself. But I think they absolutely didn't see it coming, so for them it was a surprise too that I just said, 'Okay. Then leave it be. I'm busy with ASPHYX anyway.' And during the years, I also realized that I felt really a lot better in ASPHYX; it was way more a band, really, than HAIL OF BULLETS was."

Asked if it's fair to say that HAIL OF BULLETS was more of a project than a real band, Martin said: "In the beginning, no, but after reconsidering this, yes, it was more a project than a band; it always has been. I mean, ASPHYX is way more a unit, way more working as a family, I think, compared to HAIL OF BULLETS. But that's just the thing that you see and realize after these things have happened that have happened."

Martin's replacement in HAIL OF BULLETS is David Ingram, who was previously in BOLT THROWER and BENEDICTION.