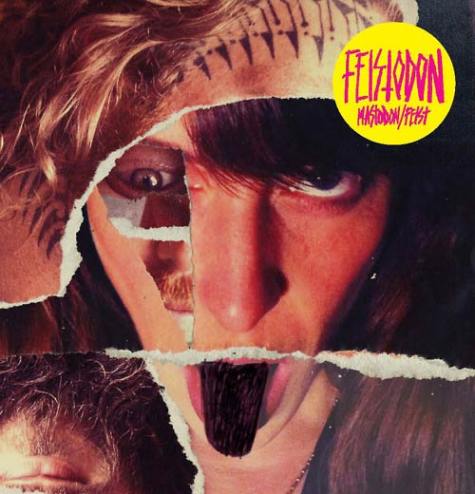 Atlanta progressive metallers MASTODON and Canadian singer-songwriter Feist have announced that they have released a digital version of their popular seven-inch vinyl single, "A Commotion" / "Black Tongue" via Warner Bros. Records and Cherrytree/Interscope Records. The tracks are available at all participating digital retailers. This highly sought-after release also includes a special interactive "A Commotion" music video directed by Vice Cooler, and also premiere today on www.listentofeist.com and www.mastodonrocks.com. The video is launched by an HTML5 "Feistodon" video app that allows users to crossfade between Feist and MASTODON's versions of the "A Commotion" to make their own unique versions.

The "Feistodon" split-single was one of the most in-demand exclusives during Record Store Day this past April 21. It features MASTODON covering the Feist song "A Commotion", from her current highly acclaimed current album "Metals" (Interscope) while Feist covers MASTODON's "Black Tongue" — a track from the rock band's critically lauded present album "The Hunter". Only 5000 color vinyl seven-inch singles were pressed up and sold out instantly.

"It's a wet dream to have MASTODON take one of my songs and put it into their massive machine," Feist told RollingStone.com.

"We didn't tell her what to do, and she didn't tell us what to do," says MASTODON guitarist Bill Kelliher. "'A Commotion' just kind of stuck out to me. I could hear the opening riff, a single A-note."

Feist told RollingStone.com that she based her decision on which MASTODON song to cover by finding a track whose lyrics resonated with her the most. "MASTODON fans would probably be disappointed to know that I actually didn't know MASTODON very well," She says. "I actually went onto one of those lyric websites, and I scrolled through 50 songs and just narrowed it down to the ones I thought I could wrap myself around the words. 'Black Tongue' is speaking in my kind of elemental language — about diamond and earth and sky. It's all just in a language that I already sort of speak lyrically. It was pretty easy to climb into that one."

In a recent interview with Sweden's Metalshrine, MASTODON drummer Brann Dailor explained how the single idea came about. "We did [the BBC television show 'Later... With Jools Holland'], and right after we got off stage, we went backstage and and we were in the hallway with [Feist], and she was talking to [MASTODON vocalist/guitarist] Brent [Hinds]. They were involved in a conversation and were just like, 'Yeah, let's do that! We should do it for Record Store Day!' Something out of left field and something we'd like to be involved with more of."

He added, "It's fun for us. I mean, most times we end up doing covers of bands that are already sort of heavy or that is already in that vein, like the MELVINS, THIN LIZZY, METALLICA, you know what I mean? What are you gonna do to those songs to make them your own? It's kinda difficult and especially with stuff like METALLICA or the MELVINS where we're so kinda familiar and in love with the versions that METALLICA and the MELVINS and THIN LIZZY have created, you wanna make it sound like theirs because that's what you're so used to hearing. You don't really wanna mess with it. With Feist, it's something that we could really play with and do something different with."