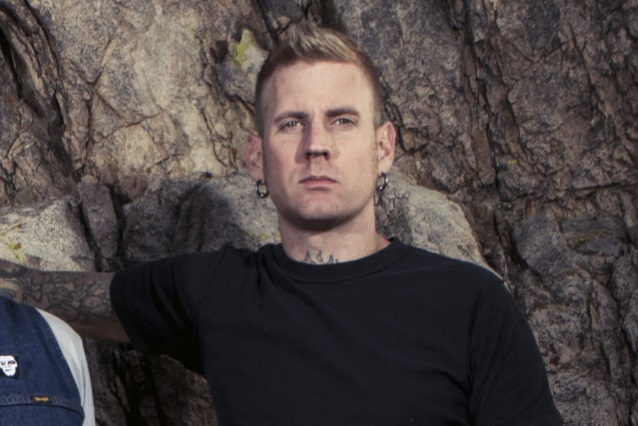 MASTODON drummer Brann Dailor spoke to Australia's Heavy about finally winning a Grammy in the "Best Metal Performance" category at the 60th annual Grammy Awards in January at Madison Square Garden in New York City. MASTODON got the nod for the song "Sultan's Curse" from its 2017 album "Emperor Of Sand", with the latter also being nominated for "Best Rock Album."

"It felt great," Brann said. "It was an emotion that I couldn't have predicted, to be honest with you. I kind of went out of my body a little bit, I think, which was really awesome."

Acknowleding that "the Grammys mean something different to each person that gets one," Brann said that for him, "it was a hundred years of family members that played music and had always wanted to stand up there and the metal scene. Just a band that's four dudes that started off, humble beginnings or what have you, playing in basements and VFW halls in the U.S., slugging it out, clawing our way through, eating baloney sandwiches and sleeping in our van and sleeping on catpiss-infested floors of the kindness of strangers. So building something from the ground up and then standing on a stage and accepting an award that Stevie WonderandMichael Jackson have both accepted was mindblowing."

Dailor went on to give credit to all the other nominees in the "Best Metal Performance" category, explaining that "any heavy metal band that's nominated for a Grammy definitely deserves one, because I think that heavy metal as a genre is probably one of the most healthy genres, with thousands of subgenres that sprout off it in its 30-, 40-year existence. And all the nominees that were up definitely deserve one — CODE ORANGE and AUGUST BURNS RED… MESHUGGAH especially, [for being] innovators, and BODY COUNT being an incredible band."

It was the fourth and fifth time MASTODON had received Grammy nominations, having missed out on the three previous occasions — "Colony Of Birchmen" (2007),"Curl Of The Burl" (2012) and "High Road" (2015) — it had been up for the "Best Metal Performance" award.

Brann said that he "was really expecting BODY COUNT to win" the "Metal" Grammy this year. "When I found out that they were playing and then they were gonna announce the award, I was, in my head, saying to myself, 'Just say BODY COUNT. Just say BODY COUNT,'" he recalled. "Because being nominated a bunch of times, which is amazing in itself and an amazing feeling to go there, and it's also a great date night — I get dressed up in my finest duds, my wife gets all dressed up — we go out and party and it's a great time. But you wanna get past when they read who won, 'cause then you can just get on with your night, and just say, 'Okay. We lost. Whatever. It doesn't matter. We're here. Let's party. Let's have fun.' But winning was a completely different experience. And I didn't have anything prepared to say, because I didn't wanna have hope in my pocket. But anyways, it was awesome and it was an amazing feeling and our family and friends and fans and everybody that we work with couldn't have been prouder and it was fucking amazing."

The Grammys are voted on by approximately 13,000 Recording Academy members, who are comprised of artists, songwriters, producers and engineers. More than 22,000 recordings were submitted for Grammys consideration this year. For 2018 awards, music must have been released between October 1, 2016 and September 30, 2017 in order to be eligible.