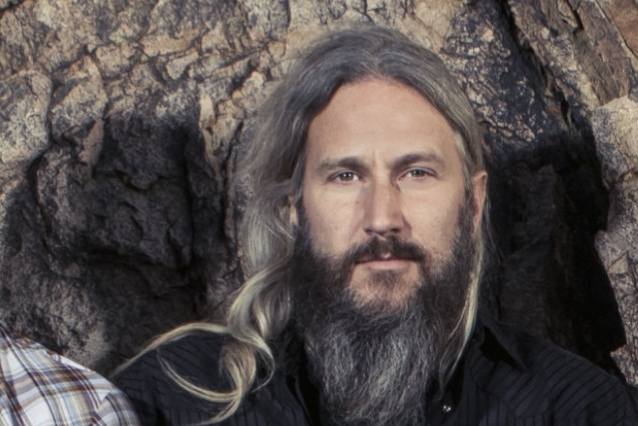 MASTODON's TROY SANDERS: Playing With THIN LIZZY Was 'One Of The Most Special Moments Of My Entire Life'

Troy Sanders from Atlanta progressive metallers MASTODON played bass for iconic rockers THIN LIZZY during their summer 2019 run of European festival appearances to commemorate 50 years since the formation of the original band and 40 years since the release of the seminal "Black Rose" album.

Speaking to the "Scars And Guitars" podcast, Sanders said: "Last year, doing those few shows with THIN LIZZY was, without a doubt, one of the top most special moments of my entire life. I wanna use the word 'surreal,' but there's a stronger version of that word. It was just incredible, unbelievable, and I couldn't believe that I would have the opportunity to do that.

"When we were done with those shows, Scott [Gorham] gave me a big hug and just thanked me so much. And he said, 'When we get THIN LIZZY going back again, I'd like you to be a part of it still, if you're interested.' And I said, 'Absolutely. You say the word. This is wonderful. It's so beautiful.'

"[Scott] is a very humble, sweet, lovable, laughing guy who wants to have a good time. He's an incredible person. And the way he was telling me how he likes to keep THIN LIZZY alive was very respectable."

Sanders went on to defend THIN LIZZY for continuing to play shows without the band's iconic frontman Phil Lynott, who died on January 4, 1986, at the age of 36.

"I know a lot of times people can question, like, 'Hey, without Freddie Mercury, there's no QUEEN.' 'Without Dave Lombardo, there's no SLAYER.' 'Without Phil Lynott, there's no THIN LIZZY.' Et cetera, et cetera," he said. "You're welcome to have those opinions, and you don't have to support the band when they still go out and continue to tour. That's what you can do — stay at home. But for anyone that's ever questioning the motives of people, why they wanna continue a band when the most notable figure is not with them anymore, it became so clear and so obvious to me, watching thousands of faces smile and sing and be happy and just loving life for the whole hour- or hour-and-a-half-long set. That was more proof than anyone would ever need — ever — to ever question anyone's reason for carrying on an artistic adventure or a band, anything along those lines. And I remember telling Scott, 'Even if I wasn't in the band, I'd encourage you to keep the band going more than just every few years doing some shows. The legend and the legacy of THIN LIZZY should be shared with people, and people will come. They love to sing along with the band and enjoy that live experience.'

"Man, the proof was beyond obvious," he added. "It was so damn cool."