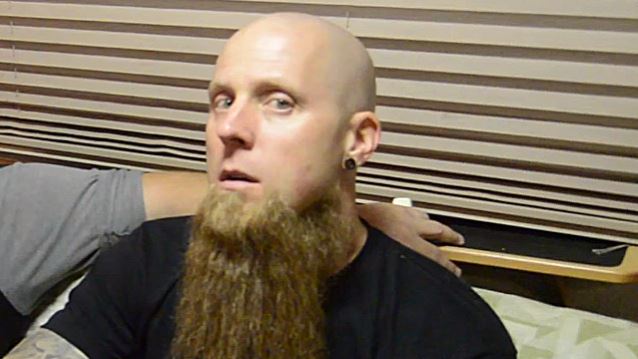 MATT SNELL: 'FIVE FINGER DEATH PUNCH Was A Great Run For Me'

RadChad of Maximum Threshold Radio conducted an interview with former FIVE FINGER DEATH PUNCH and current INVIDIA bassist Matt Snell before the latter band's October 18 concert at The Troubadour in West Hollywood, California. You can now watch the chat below.

Speaking about his time in FIVE FINGER DEATH PUNCH, Snell said: "FIVE FINGER DEATH PUNCH was a great run for me. What an experience! What's to complain about? I went around three or four times, I played in front of more people than I could ever imagine, so… I've got nothing but love for 'em."

Snell previously told the "Talk Toomey" podcast that "the greatest thing" about FIVE FINGER DEATH PUNCH was that "it just happened so quickly." He explained: "We were at it for like a year or so before it really happened, so what people saw on a professional level, it happened really fast. But in the big picture, everybody in that band worked a long time. We worked twenty years to become an overnight success. So it was a great ride, a lot of fun."

He continued: "I remember picking Ivan [Moody, vocals] up for his audition at a gas station. All the way to playing [U.K.'s] Download [festival] and getting shut down for starting a riot in front of seventy thousand people. So that's how big the scope of that was. And I got to go around the world a bunch of times and play hundreds of shows and helped build and create what is today this huge and powerful band. So, nothing but good memories from me.

"I love those guys. I hope they're doing well… I don't have any bad blood with any of those guys. They made their decision, and I'm the result of that decision, so… And I'm far from the first one. But who cares, you know? They're my brothers, and I love them… I think people want there to be a problem. I think people want there to be some sort of drama there, and there isn't a place for it. I hate to burst everyone's bubble, but there just isn't a problem there, and there never was."

FIVE FINGER DEATH PUNCH parted ways with Snell in December 2010 but didn't announce his exit until April 2011. FIVE FINGER DEATH PUNCH guitarist Zoltan Bathory told "Harddrive Radio" at the time that he couldn't discuss the reasons for Snell's departure because "we have contracts between each other and the contracts that we have between each other always protect the bandmembers. Like we have a contract with Matt, you know. Word by word the contract says I can't tell you anything that would hurt his career if he goes any further." He added in a separate statement to Gun Shy Assassin: "Yes, [Matt] was fired. As for the sound of the band, and the recording process, etc. — Matt wasn't a writing member so it doesn't change anything. The process is the same as it always was."

Snell is currently playing with INVIDIA, the new project featuring Travis Johnson (IN THIS MOMENT) on vocals and Brian Jackson (SKINLAB) on guitar.

INVIDIA recently completed work on its debut album at a studio in Las Vegas with producer Logan Mader, who has previously worked with FIVE FINGER DEATH PUNCH, DEVILDRIVER, GOJIRA and CAVALERA CONSPIRACY, among others.