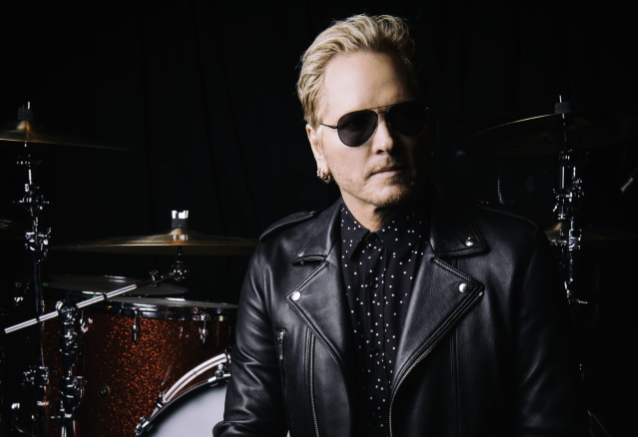 MATT SORUM Looks Back At The Rise And Fall Of VELVET REVOLVER: How 'We Imploded'

Matt Sorum has reflected on the breakup of VELVET REVOLVER, the band he formed in 2002 with fellow ex-GUNS N' ROSES members Duff McKagan and Slash.

Sorum, McKagan, Slash and guitarist Dave Kushner held an exhaustive singer search after VELVET REVOLVER's formation that lasted for almost two years, during which they issued an open invitation to the public to send in demos. Eventually they settled on former STONE TEMPLE PILOTS singer Scott Weiland.

Sorum discussed the formation of VELVET REVOLVER and the band's eventual split during an appearance on the latest episode of the "Sound, Sobriety And Success With Matt Pinfield" podcast. He said (as transcribed by BLABBERMOUTH.NET): "When we all got back together [after our departures from GUNS N' ROSES], our big thing was, 'We can't do this if we're gonna be loaded and everyone is fucked up.' So we made a pact: 'Everyone get clean. Let's get cleaned up.' We were in really great shape. I went to the gym. I was ripped. I was the skinniest I've ever been… I was already in my 40s. I'm, like, 'Let's see if we can just look like a great rock and roll band, get our look together here. Get our songs together, number one. Get looking good.' Scott was looking lean and mean. I don't know what he was doing to look like that, but he was great. And he was in good form. He'd cleaned up. We'd worked with him on it — we all did.

"We kind of looked at it like the AEROSMITH model," Sorum explained. "'If we're gonna continue to play rock and roll, we can't go out there like 20-year-old kids. We can't be out there every night getting fucked up playing rock [and roll] — we can't. We're older guys. We've gotta get our shit together.' We all got it together, man, and we were on fire. And I remember we were all nervous 'cause it was the first time we'd ever gone out on the road clean like that, sober.

"People give you drugs, man," Sorum added. "C'mon, forget it; you can get drugs. But if I had to do it all over again, I would be, like, "Cmon, you guys, man. We're not gonna get this opportunity again. This is it for us.' And we just — we imploded.

"The second record, I like the second record — I think it's a good record — but it didn't have the angst of the first record. The first record had a youthful thing because we were hungry. We meant it. I think we meant it on the second record musically, but it didn't have that fairy dust of angst. And typically you hear that on a lot of bands' early records, even though we were [all experienced]. Typically the first couple of records are always the best records. AEROSMITH 'Toys In The Attic', 'Rocks'."

Weiland was found dead on his band's tour bus in December 2015. The vocalist, who was 48 years old at the time of his death, was on tour with THE WILDABOUTS in Minnesota when he was found unresponsive.

Matt told "Sound, Sobriety And Success With Matt Pinfield" about his former bandmate: "I had my differences with Scott. We fought like brothers. But really what I wanted for Scott was the best for Scott. Scott was so fucking great. You just wanted him to realize how great he really was. You wanted to shake him and go, 'Scott, you're great.' He would put off the air of, like, he was the epitome of a rock star. He'd walk on stage and you'd go, 'There he is. There's the frontman.' They just don't fucking make them like that anymore."

In the past, Sorum had made it clear that he and his bandmates were very aware of Weiland's drug-addiction battles and chronic tardiness when they first joined forces with him to launch VELVET REVOLVER.

Weiland and his former VELVET REVOLVER bandmates said all kinds of nasty things about each other after their acrimonious split in 2008. But Sorum later said he wasn't bothered anymore, partly because he said he had a chance to talk things out with the frontman a couple of years before Scott's death.

A few days after Weiland's death, Matt reiterated his view that the launch of VELVET REVOLVER was the high point of his career. He said: "I remember me and Duff McKagan came out of a… We were coming out of the subway in New York, and he's two guys who were in GUNS N' ROSES, right? And we came out of the subway, and this guy looks over, and he goes, 'Hey, you're Duff and Matt from VELVET REVOLVER.' And I looked over at Duff. I went, 'Oh my God! That's the first time I've ever heard that.' And it was a very pivotal point for us, because now we'd created something new, modern, but at the same time, it was still great rock and roll. So I've gotta thank Scott for that."