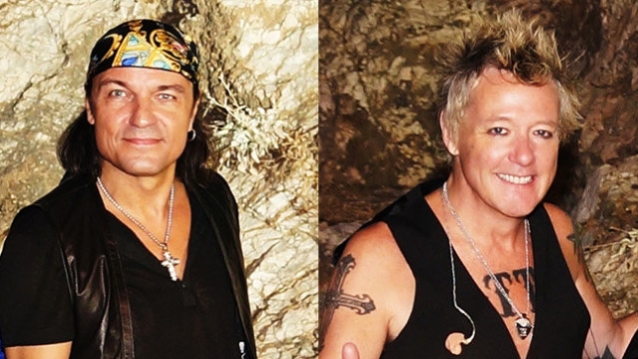 MATTHIAS JABS Says SCORPIONS 'Couldn't Continue' With Drummer JAMES KOTTAK: 'We Gave Him All The Chances, And 10 More'

Matthias Jabs says that SCORPIONS "had to make" the decision to fire James Kottak, explaining that he and his bandmates gave the drummer "all the chances" to get better.

In September 2016, Kottak was dismissed from the legendary German hard rock band during his well-publicized battle with alcoholism and was replaced by former MOTÖRHEAD drummer Mikkey Dee.

Jabs spoke about the lineup change during an appearance on a recent episode of "Rock Talk With Mitch Lafon". The guitarist said: "James was a real good friend — and he still is — but we couldn't continue with him. We gave him all the chances, and 10 more. And it was something that developed over the years — the drinking habit. It came in waves — sometimes it was good for four weeks, and then [there] was drama, and if you know him, you know what that's like. Then if it affects the show, you have to go, 'Hmmm…' Because our drum riser goes up 21 feet, or 24 feet sometimes, if the venue allows it, and the production manager, or stage manager, goes, 'I can't have him go up there. It's too risky.' If you can't really walk down the stairs straight, you can't have that. So that affects your intro of the show, and that's not good — it's not professional."

Kottak, who joined the SCORPIONS in 1996 and played with the band for 20 years, called his exit an "amicable departure" during a recent interview with IndiePower.com. "I have had my problems with alcoholism — I will not deny that," he said. "I've been in recovery for about two years. I'm not perfect; I've struggled. I've been up, I've been down, I've been in and out. But the thing is that I'm working my program, and I'm working hard, and I don't preach it — I'm not going, 'Don't drink.' Eff that, man. This is my personal situation. I've had my problems with alcoholism. Thank God I was never a pill addict — that was never my cup of tea. And it is what it is. And I acknowledge that, and I'm working on it. And it's a thing. And I have the gene — I'm an alcoholic. But the thing is I'm working on it…"

Last fall, Kottak told the "Talking Metal" podcast that he had "no regrets" about his exit from the SCORPIONS. "To be perfectly honest, I've been pretty burnt out for the last four or five years, but I'm still grateful and so thankful to be in the SCORPIONS for 21 years," he said.

Kottak also spoke about the circumstances that led to his departure from the SCORPIONS, a series of events that began more than two years ago.

"In April of 2016, we were in Germany, and, unfortunately, Klaus [Meine, SCORPIONS singer] had some problems with his voice, and we had to cancel the last eight shows in Europe," he explained. "And that left a gap of about two and a half months. At that point, I was kind of struggling a little bit [with my personal issues], so I decided to go down to Antigua. I was gonna go down there just for a month and kind of check myself and get a tune-up. And it's a wonderful, wonderful place.

"So I went down there while we still had some time, and then I go, 'You know, I'm gonna stay an extra two weeks.' And then I was gonna go back. And the guys were going, like, 'Man, take advantage of this.' So I ended up staying 92 days. In the meantime, there were a few [SCORPIONS] gigs [lined up], and, of course, they had to move on, and I gave them my blessing. They go, 'Well, we're gonna get Mikkey to fill in for you.' I'm, like, 'Cool, man.'

"So I came back and then there was some time off," he continued. "I came home about the end of July, and the next batch of gigs were gonna be in South America in September. And at that point, all the gear's getting shipped and all that stuff, and it was only about a handful of dates — seven dates. And to swap the gear out is really expensive. To send Mikkey's stuff home and get my stuff out there was, like, twenty-five, thirty thousand dollars. So I go, 'You know what? I don't wanna be down there anyway.' And then after that, there was just another six or eight gigs left for the year. So it was kind of, like… We were going, 'Let Mikkey finish it out. I could use the time home.' And I got a tune-up and everything was cool. But then we talked, I think it was the end of October-ish, something like that, we were kind of talking and we kind of mutually agreed that it just didn't make sense [for me to continue playing with the band]."

Once he got word that he was no longer a member of the SCORPIONS, "it was actually a relief, to tell you the truth, that it came to that," Kottak said. "They called, and I thought everything was gonna kind of cruise on, but it just worked out that way. And things happen. And, like I said, 21 years with one band is incredible, and the guys are just so wonderful; I love 'em to death. But it is what it is. Life has its twists and turns, and this is one of 'em."

Kottak will tour this fall with a revamped version of KINGDOM COME, also featuring guitarists Danny Stag and Rick Steier, and bassist Johnny B. Frank, along with singer Keith St. John (formerly of MONTROSE and LYNCH MOB). Original frontman Lenny Wolf declined to participate in the trek, which will kick off on September 27 in Seattle, Washington.