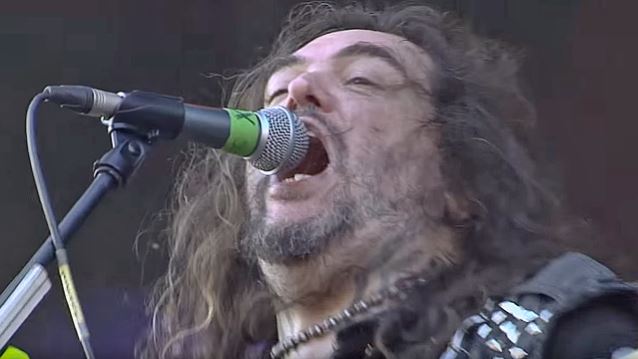 DJ Mama of the WSOU 89.5 radio station recently conducted an interview with Max Cavalera (SEPULTURA, SOULFLY, CAVALERA CONSPIRACY, KILLER BE KILLED). You can now listen to the chat using the SoundCloud widget below. A couple of excerpts follow (transcribed by BLABBERMOUTH.NET).

On the upcoming "Return To Roots" North American tour with his brother Igor Cavalera (drums) during which they will celebrate the twentieth anniversary of SEPULTURA's classic album "Roots" by performing the LP in its entirety:

Max: "This tour is amazing, because it was such an iconic record. It's even more powerful now than it was when it came out, I think. Now that it's twenty years down the road, the songs have become super classics and it's gonna be a lot of fun playing them live with Igor. And we have some really designs for t-shirts and a really cool backdrop. We're excited; I think it's gonna be awesome. It's a fun album to play too. There's a lot of really, really high-energy songs like 'Spit', 'Straighthate', 'Ratamahatta'. It's a fun record to play, so I'm excited for it. I think it's gonna be great."

On what fans can expect from the "Return To Roots" tour:

Max: "Well, hopefully we'll get to go a lot of places with it, and people get to experience a bit how this album was, because it was a special record, and there's some magic about this album that's really quite powerful when you play the songs live, and people will have a chance to experience a little bit of that on the 'Return To Roots' tour. I'm excited to play with Igor after twenty years of making this record, and I'm excited to play some songs we've never, ever played live, like 'Breed Apart', 'Ambush' and 'Endangered Species'; we've never played those live, so it's gonna be great to get to play that stuff live."

On his current relationship with Igor:

On whether they will perform the "Roots" songs the way they were originally recorded:

On the possibility of performing other SEPULTURA albums in full in the future:

Max: "I'm hoping this idea goes good, so we can do other records, like we can do 'Arise' and 'Chaos A.D.' and even 'Morbid Visions'. I think 'Morbid Visions' would be a good one to do with the original [SEPULTURA] guitar player, Jairo [Guedz], 'cause he lives in [SEPULTURA's original hometown of] Belo [Horizonte, Brazil]. And he'd be great to do that with us. So let's see how this goes. Hopefully it'll open doors to do more stuff like this."