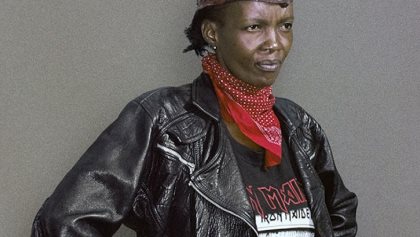 South African photographer Paul Shiakallis has produced a series of photos, "Leathered Skins, Unchained Hearts", of the "queens" of Botswana's heavy metal subculture, called "Marok," which translates to "rocker" in Setswana. The portraits were shot in the Gaborone, the capital city, and feature the women as their "queen" alter-egos, going by names like Onalenna Angelovdarkness, Amokian Lordess and Phoenix Tonahs Slaughter.

SKINFLINT, METAL ORIZON, WRUST, CRACKDUST, OVERTHRUST and AMOK are some of Botswana's biggest metal bands, but since the Marok scene is very small, they only play shows every few months. "When they do have a show, rockers from all around Botswana make the effort to show up, even if they have to travel 700km from another town," Shiakallis told Hyperallergic.

Shiakallis added that "every portrait I took almost never happened. Sometimes, the queens' boyfriends or husbands would thwart the shoots" since they didn't want their partners to be photographed by, or even in the presence of, another male. "Some queens were reluctant to pose for photographs, wary about where the images would end up, as they're still 'coming out' as rockers."

Check out all the photos at PaulShiakallis.com.

Another South African photographer, Frank Marshall, who captured Botswana's rockers in all their Hell's Angels-style glory as part of his "Renegades" series of portraits, told CNN: "Metal was seeded here [in Botswana] by a classic rock band that started in the early '70s. Since then, it's evolved and grown. In the last 10 to 20 years, it's come to be visually composed of what it looks like now — the guys dressed in leather. It started off with classic rock and later on more extreme forms of metal were introduced."

So into these Queens and their #GothAF names. | The Queens of Botswana’s Metal Scene https://t.co/tcCWTdbX8Qpic.twitter.com/aew7W3HYiR