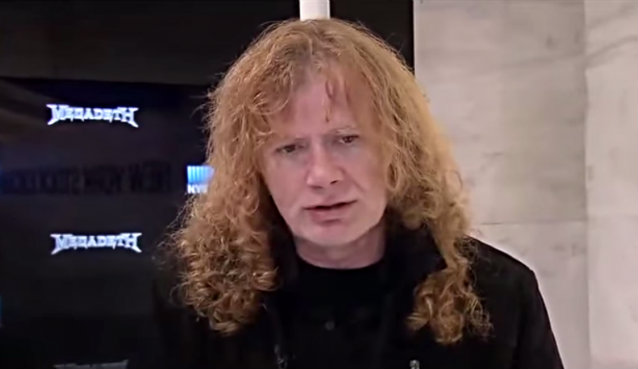 MEGADETH leader Dave Mustaine was interviewed this morning (Friday, September 15) when he made an appearance on the New York Stock Exchange facade balcony. You can watch the chat below.

Asked what is next for him and MEGADETH, Mustaine said: "We're gonna do this [North American] tour with the SCOPRIONS, then we have a run down in South America. And then we're gonna take time off — the tour is over — and get ready to do the next record. I'm working on a video game that encompasses a lot of the band's history and a lot of little riffs that we've never used before, stuff like that, and just prepare for the next tour, next campaign. We owe our record label one more record, so we, at least, are gonna be doing one more record. I don't see the end in sight for us, because the band's getting along really well right now, and we're playing great."

MEGADETH's tour with SCORPIONS kicked off last night (Thursday, September) 14 in Reading, Pennsylvania and will conclude on October 15 in Tampa, Florida. The sixteen-date trek, dubbed the "Crazy World Tour", celebrates SCORPIONS' 1990 LP of the same name.

MEGADETH bassist David Ellefson recently confirmed that the band is contemplating returning to the studio at the end of the year to begin work on the follow-up to 2016's "Dystopia" album.

MEGADETH's upcoming effort will mark the band's first release to feature new drummer Dirk Verbeuren, who officially joined the group more than a year ago.

Thanks to everyone at the @NYSE. 📈 @davemustaine@megadethbeer@mustainewinery#nyse#megadeth#megadethbeerpic.twitter.com/nl3OjpEf9P