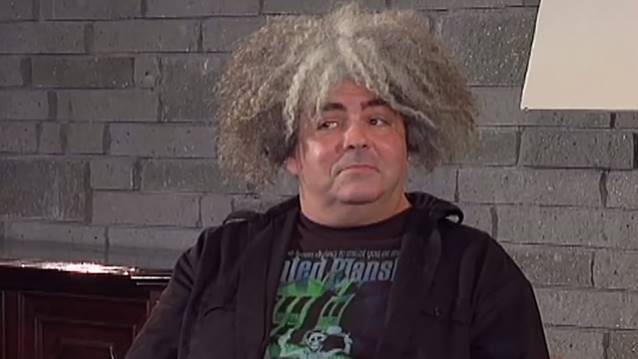 In a brand new interview with the Missoula Independent about his new acoustic record, "This Machine Kills Artists", MELVINS frontman Buzz "King Buzzo" Osborne — who has a history covering KISS tunes and mimicking album covers — was asked to weigh in on Tommy Thayer and Eric Singer dressing up as Peter Criss' and Ace Frehley's respective "Spaceman" and "Catman" personas (designs owned by KISS leaders Gene Simmons and Paul Stanley) after Ace and Peter left KISS. "I couldn't care less," Buzz replied. "As far as I can tell, Ace Frehley and Peter Criss are fucked-up alcoholic junkie guys. So I don't think Gene Simmons and Paul Stanley should let those two fuck-ups ruin them. Why should they? Okay, they chose to be alcoholics and fuck-ups, now in doing that they have to face the consequences. Gene Simmons didn't do it, why should he face the consequences? That's what I think."

He continued: "I think [Tommy and Eric] should be able to do whatever they want. I don't fault them at all for it.

"It's bullshit music, no one cares. It's not overly important. No music is.

"Music is an extra. It's an extra thing you do in your life. It's not really important. So I take stuff like that with a grain of salt."

Back in April, former SKID ROW singer Sebastian Bach told Ultimate Classic Rock that he understood why Simmons and Stanley refused to only perform with Frehley and Criss at KISS' induction into the Rock And Roll Hall Of Fame.

Bach added cryptically: "Ace has sides to him that maybe the fans don't see. That's all I can say." Sebastian also revealed that he is currently working on an autobiography that will contain stories in it which "will explain more of that topic." He concluded by saying, "I understand why Gene doesn't play with [Ace]."

During a February 2014 interview on Cleveland's WMMS-FM radio station, ANTHRAX guitarist Scott Ian also weighed in on KISS' Rock Hall controversy, saying "I'm a fan, just like everyone else, and would I wanna see, if I was going … the four original dudes back in makeup one more time? Of course I would, as a fan," he said. "But bands don't do things dictated by what the audience wants. A band would last about a year if that's how you worked. You have to do things the way you wanna do them."

Ian continued: "KISS has been around for 40 years and are bigger now than they were in 1977 because Gene and Paul make smart decisions — that's why. So, as a fan, and if you love them, you have to abide by the decisions that Gene and Paul are making for their brand and their band. So, why people get so upset over these things, I really don't understand.

"I think they made the right decision by saying, 'We're just not gonna play. You can't please everybody. We're just gonna shut it down and just not do it.' I get it. I understand."