MESHUGGAH Is 'Excited' About Returning To The Studio

Guitarist Mårten Hagström of Swedish experimental extreme metallers MESHUGGAH was interviewed on Chile's Radio Futuro before the band's November 12 performance at Teatro Caupolicán in Santiago. You can now listen to the chat using the SoundCloud player below. A couple of excerpts from the interview follow.

On MESHUGGAH's plans for the immediate future:

Mårten: "This is kind of the finishing end of the 'Koloss' tour. We're coming off this and then we're doing India once again and then we're, like, out. We might be doing a couple of anniversary shows next year, but that's about it. So what's gonna happen now is come December, we're gonna look at writing a new album. We always do that — it's, like, two more years or touring and then two years of writing the album. And then it takes a little while before the albums actually turn up. So we're feeling pretty excited about that. 'Cause it's always, like, when you've been doing one thing for a long time, it's always nice to switch it up — go from touring back into the studio, and then when you're fed up with the studio, you switch back out to the touring. So that's good."

On how MESHUGGAH's latest album, "Koloss", compares to the band's albums:

Mårten: "That's always hard given the fact that if I'm comparing it, I'm compating it to a bunch of different albums that are different by themselves. But if there's one thing that I think we're kind of happy with regarding 'Koloss', it's, like, we like the songs and all of that, but the thing is how the production and the material came together to form maybe a little bit of an atmosphere, a little more organic and a little more groovy than before — not a hundred percent as machine-like to the feel as the older stuff. And that was something we wanted. We didn't wanna lose our spirit, sort of, but we wanted to go for what was important right now, and that was to make something more dense. And everything around us is, like, focused on, especially with all the talk about the 'djent' scene and everything, there's so much stuff going on that's solely focused on technicalities and the technical aspects and how you do this when you tweak this and how's the guitar set up and blah blah blah. That's great, but we still wanna remind ourselves [to] focus on why we're doing this — because we love playing music, and music is an emotion, it's not a math effort. So that's why we wanted to do it that way, and we're happy we succeeded — for us. It sounds the way we wanted it to."

As previously reported, MESHUGGAH is featured on the cover of the November 2013 issue of the Indian edition of Rolling Stone magazine.

MESHUGGAH will perform at the Bacardi NH7 Weekender festival in India at the end of this month. The fourth edition of the festival will feature more than 200 bands across six stages in four cities.

In a recent interview with Australia's Loud magazine, Hagström was asked what the next step forward for MESHUGGAH is, creatively. "I have no idea, and I never do," he replied. " And I think that's a good thing, 'cause people sometimes say that we're pretty unpredictable, but I don't really think we are, because we have a sound that's been with us since at least like the 'None' EP (from 1994),that's very us. [laughs] It doesn't really change all that much, but it's still a progression, and what I mean by taking a step forward is that we're still, we've been around now. We're veterans in this game [laughs], and we're still having fun with what we do, with experimenting with the music that we want to create. So as long as it feels like we're making it better, and as long as it feels like we're doing something that we can at least stand for and be proud of, that's all that we ask."

MESHUGGAH earlier in the year completed touring North America with ANIMALS AS LEADERS as direct support and INTRONAUT opening each evening. 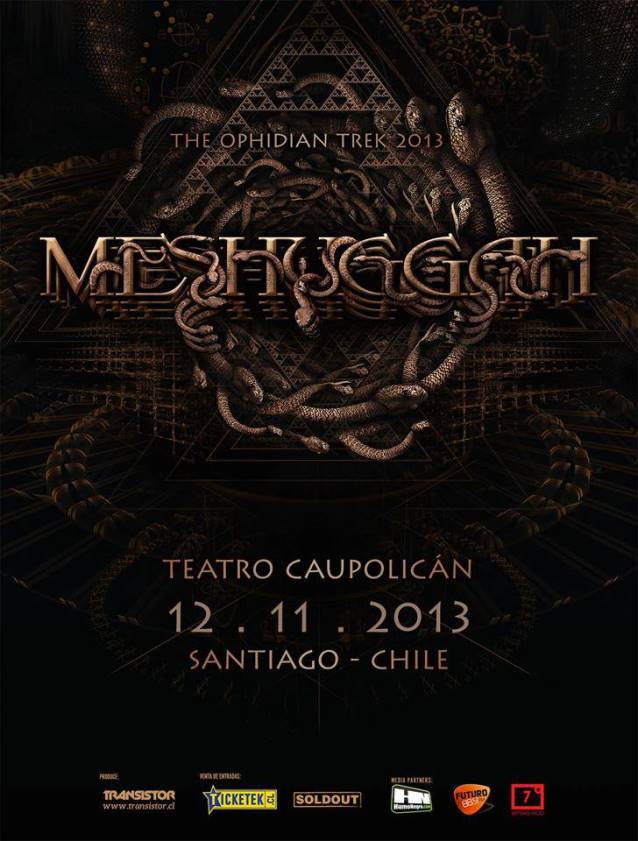