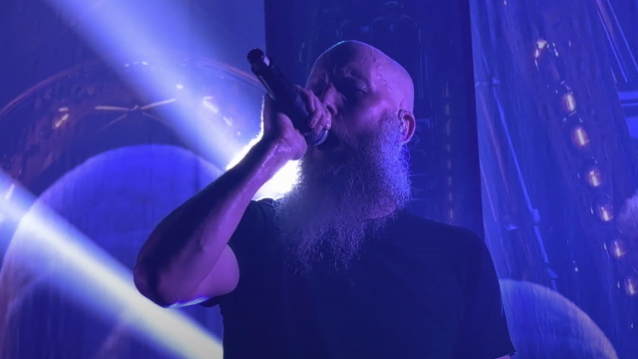 MESHUGGAH Releases Music Video For 'They Move Below'

Swedish extreme tech-metal pioneers MESHUGGAH have released the music video for the song "They Move Below". The clip was produced with the assistance of an AI program to manipulate images based on the artist's interpretation of themes in the music and title.

"They Move Below" is taken from MESHUGGAH's ninth studio album, "Immutable", which was released in May via Atomic Fire. The follow-up to 2016's "The Violent Sleep Of Reason" was recorded at Sweetspot Studios in Halmstad, Sweden; mixed by Rickard Bengtsson and Staffan Karlsson; and mastered by multiple Grammy Award winner Vlado Meller (METALLICA, RAGE AGAINST THE MACHINE, RED HOT CHILI PEPPERS, SYSTEM OF A DOWN). Visionary artist Luminokaya once again created the stunning cover artwork.

MESHUGGAH guitarist Mårten Hagström discussed "Immutable" during an appearance on MACHINE HEAD frontman Robb Flynn's "No Fuckin' Regrets With Robb Flynn" podcast. He said: "It's a double album, if this was a vinyl. It's 13 tracks; 66 or 67 minutes of music. It's the longest album we've put out so far, to this date. And it's a bit funny, 'cause when we started writing, I was really adamant that, 'Let's try to make a 'Reign In Blood' album' — like the MESHUGGAH 'Reign In Blood' album; just short but sweet. Not maybe 27 minutes, but keep it just over half an hour. 'Cause albums aren't what they used to be anyways; it's singles. So, obviously, we went the opposite direction and made a double album and just built it as an album and thought of it as, like back in the day, very important with the track listing and all that shit.

"For us, it was, like we always do, trying to find the… What's the MESHUGGAH sound? How do we keep it but make it interesting to us?" he continued. "'Cause that's been our modus operandi all along: if we please ourselves, we please our fans. That's how it's been. So that's what we need to take care of.

"We started writing it when we came off that COVID truncated touring cycle, and then, after that, it was just all systems go. We've been working our asses off for almost three years now. And we're really happy with the result. We may have tried out a few things that we haven't done before — not anything mindblowing. But from the reactions we've been getting so far, I think it's pretty much what we hoped for. 'Cause people are saying that it's an unexpected album. And that might sometimes be a bad thing, but in our minds, it can never be. And nobody said that it was surprising in a bad way; only positive so far. So we'll see.

"You know what it's like. When you work on an album, you really don't know. When you're done with it, everything's so jumbled up in your head, you don't know how to feel about it. It's just, like, 'Okay. Good enough. Let it go.'

"But we're really fired up about it," Mårten added. "It's a lot of music. It's by far the most dynamic we've been on an album. And that's something we've been going for. And I look forward to see how it comes across."

Hagström previously stated about the "Immutable" title: "The title fits perfectly for where we are as a band. We're older now. Most of us are in our fifties now, and we've settled into who we are. Even though we've been experimenting all along, I also think we've been the same since day one. The way we approach things and why we still make new albums, and why we still sound the way we do, it's immutable. Humanity is immutable, too. We commit the same mistakes over and over. And we are immutable. We do what we do, and we don't change."

MESHUGGAH recently completed its first pandemic-era U.S. tour. The dates, originally planned for early 2022, kicked off on September 16 in Worcester, Massachusetts and concluded on October 16 in Atlanta.