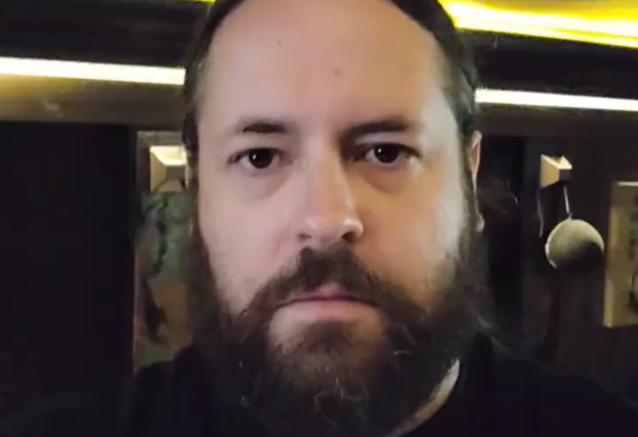 Members of TESTAMENT, SUICIDE SILENCE, EXODUS, HATEBREED, AMON AMARTH and QUEENSRŸCHE are among the musicians who have reacted on social media to the passing of Trevor Strnad, vocalist of the Michigan death metal band THE BLACK DAHLIA MURDER.

Strnad's death was announced by his bandmates on social media earlier today. They wrote: "It is with deep sadness that we announce the passing of Trevor Scott Strnad. Beloved son, brother, and Shepard of good times, he was loved by all that met him. A walking encyclopedia of all things music. He was a hugger, a writer, and truly one of the world’s greatest entertainers. His lyrics provided the world with stories and spells and horror and whimsy. It was his life to be your show." The band also shared the telephone number for the National Suicide Prevention Lifeline.

THE BLACK DAHLIA MURDER guitarist Brandon Ellis wrote in a separate post: "I can not even begin to process this... In total shock and disbelief. It has been my greatest honor to spend the last six and a half years in a band with this absolute icon and legend. A brother. A best friend. One of the funniest and most entertaining people to walk the earth. The life of the party that is THE BLACK DAHLIA MURDER, as well as any given room he happens to occupy. A lyrical mastermind. A champion of the entire culture of heavy music. Also my biggest supporter. This man changed my life and believed in me more than I do myself. I can not believe there will no more laughs had, songs written together, or stages decimated with Trevor at the helm. I hope he knew how much he was loved the world over."

In an April 2021 interview with Metal Injection, Strnad spoke about his battle with depression and alcohol dependence. At the time, he said (as transcribed by BLABBERMOUTH.NET): "At the rate I drink while we're gone on tour, it's just not sustainable for getting older. Being 40-plus and being able to do what I do well and not look like a shithead, I've gotta be better to myself. So that's really the impetus [for quitting drinking]. That's the heart of it. It's not that… I know I'm no fun [when I'm drinking].

RIP Trevor Strnad, you’ll be missed dearly, my deepest condolences to TDBM, his family, friends & fans. Thanks for all the laughs, the stories, the music, & so much more. ❤️❤️❤️

Totally shocking news. Truly great guy/artist. Testament was supposed to tour with the band (derailed by Covid) and it was a blast to work with him in @metalallegiance. Huge loss.
RiP @TrevorTBDMhttps://t.co/PTBESRWWNv

Trevor was nothing but a lover and an amazing, talented human. We will miss him. Our hearts go out to the band, his family and all his fans around the world.⁣
⁣
National Suicide Prevention Lifeline⁣
800-273-8255 pic.twitter.com/g9IQCXhQOV

RIP to our beloved brother Trevor Strnad. We are at a loss for words.

Our hearts go out to Trevor Strnad’s family and loved ones. He lit up stages and grimy green rooms alike. We were once privileged to see him do so nightly, many years ago during a special time in our young lives. Rest easy old friend. 🖤

This is absolutely devastating.

Our deepest thoughts are with Brian, Alan, Brandon and Max.

We love you so much, Trevor.

Thank you for your passion, your generosity, your humor, your immense talent and your indomitable spirit. pic.twitter.com/iwPq3qkJxf

Rest easy, Trevor. As long as there’s a young metalhead out there getting introduced to the good stuff by someone even the tiniest fraction as cool and inspiring as you were, you’ll never really be gone.

RIP Trevor Strnad @TrevorTBDM - I’m just stunned by this. What a tremendous loss. Sending my love & condolences to everyone. 💔 https://t.co/ns6joaqAhI

Deepest condolences to the band and his family. May his memory be a blessing #trevorstrnad

It’s with a heavy heart that we say goodbye to TREVOR STRNAD of The Black Dahlia Murder.

Trevor was one of the...