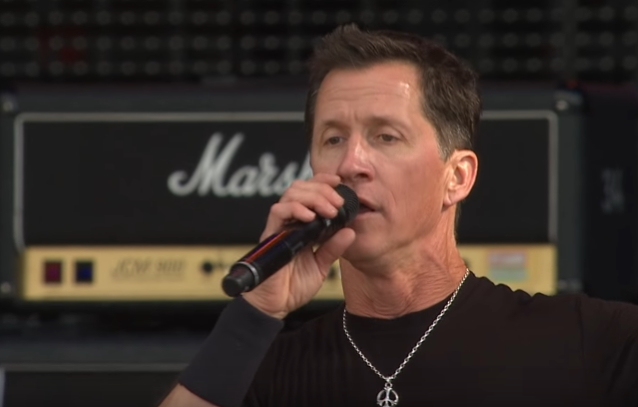 Howe died Monday morning (July 26) at the age of 55 at his home in Eureka, California. No cause of death has yet been revealed.

The reunion between Mike and METAL CHURCH was put in motion in July of 2014 when Mike started working with guitarist Kurdt Vanderhoof on a side project Kurdt was forming with Nigel Glockler from SAXON. Through these initial conversations, Kurdt convinced Mike to ultimately return to METAL CHURCH. The idea was to see if they could recapture some of the magic from the three albums METAL CHURCH released in the late '80s: "The Human Factor", "Blessing In Disguise" and "Hanging In The Balance". Out of those sessions, 2016's "XI" was born and captured the sound that made the band fan favorites in the '80s and mixed it with a new, invigorated sound.

METAL CHURCH's latest release was "From The Vault", which arrived in April 2020 via Rat Pak Records. The effort was a special-edition compilation album that featured 14 previously unreleased songs from the Howe era, including four newly recorded studio tracks, among them a redux of the band's fan favorite classic "Conductor".

Howe is not the first singer of METAL CHURCH to die. David Wayne passed away in May 2005 from complications following a car crash. He was 47 years old.

Wayne sang on METAL CHURCH's first two classic offerings (1984's "Metal Church" and 1986's "The Dark") before leaving the group and being replaced by Howe.

RIP my sweet friend. I have no words for this loss. Love and respect to you always. #mikehowe#metalchurch#legend4everpic.twitter.com/CfZczC1g4h

So sad to hear of the untimely passing of Mike Howe (centered) of @metalchurchis1. I finally met him for the first time this photo was taken in Vegas 04/19. Condolences to his family, friends and fans! pic.twitter.com/C9yIx0iH2J

So sorry to hear of the passing of Mike Howe from @metalchurchis1 I can’t say I knew him well, but I did spend a weekend with him and the band in the studio while they were recording his first album with the band (Blessing In Disguise) back in 1988. Gone way too soon #RIPMikeHowepic.twitter.com/EpzuSR8nFz

So #sad to hear the #terrible news of the passing of the one and only #MikeHowe of @metalchurchis1. Such a big loss!
What a great guy and fantastic singer! You will be missed sooooo much! We will never forget you!
R.I.P., my #friend!!
❤️🙏❤️😭❤️
Much #love, #Doropic.twitter.com/POChaiTC5W

Just heard the sad news of the passing of Mike Howe. We signed his first band, Heretic to @MetalBlade. Then of course he went onto a great career with @metalchurchis1. Really good guy and gone way too soon. Condolences to his family and friends. #RIPMikeHowe

Saddened to hear of the the passing of former HereticMetal vocalist Mike Howe. R.I.P.

Shocked and saddened to learn that the incomparable Mike Howe, of Metal Church, unexpectedly passed away this morning. There will never be another like him. RIP, Brother.

Words fail. Can't believe we lost not only an amazing singer, but a tremendously great guy. Our bands crossed paths...

Incredibly saddened to hear about the passing of Mike Howe. I had the honor of touring with him a couple of years ago on...