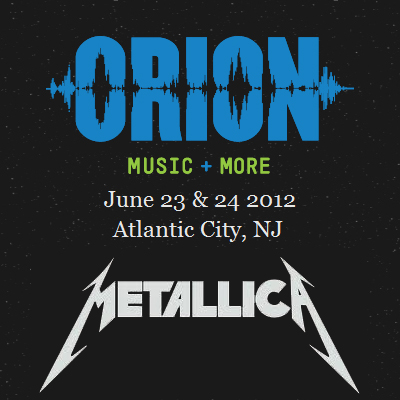 A 58-minute recap of some of the second day's events, including METALLICA's performances of the songs "Hit The Lights" and "Master Of Puppets", can be seen below.

The band's setlist for the June 23 concert was as follows:

The band's setlist for the June 24 concert was as follows:

When asked why METALLICA would want to do their own festival, guitarist/vocalist James Hetfield said in a recent interview, "First of all, because we can. Why wouldn't you? We're just trying to bring a little more of a mix to what is going on. . . . I think the Europeans are able to look at a festival more as an event than 'my favorite band is playing.' We're not necessarily trying to reproduce that in the States, but we'd like to bring a little taste of that here."

Regarding the significance of the "Ride The Lightning" and "Metallica" albums, Hetfield said, "'Ride The Lightning' started to splinter us off from your SLAYERs and other thrash bands. A song called 'Fade To Black' was an instant thorn in the side of the metal community. It was the first veering off the studded path. [The Black Album] became the album, I guess, that people needed to have. It's a gateway for people to get into METALLICA."