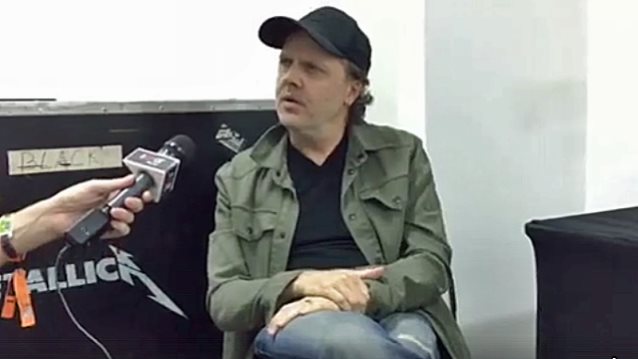 METALLICA drummer Lars Ulrich was interviewed by Sonar FM before the band's April 1 concert at Lollapalooza Chile in Santiago. You can now watch the chat below.

Speaking about what it has been like for METALLICA to self-fund its projects, having launched their independent record label, Blackened Recordings, Ulrich said: "Well, I think being autonomous and being independent has always been in the METALLICA spirit. We've never felt like we really belonged to anything specific. We've never felt like we were part of a movement or part of a wave; we've always kind of felt like loners. I've always felt like a loner, and I think that James [Hetfield, METALLICA frontman] and I, when we found each other, we connected over music, but we always felt disenfranchised and a little ostracized. And so being in a band, it gives you a sense of belonging to something. And so we love what we have, and I think we always feel like we never really fit in anywhere. And, obviously, whenever I say that, people [are like], 'Oh, you're in the biggest band in the world,' or whatever, but that doesn't mean very much. I still never quite feel like we really fit into anything; we're always kind of in our own little world. But, obviously, we have a lot of friends and fans with us, which makes it worthwhile. But being autonomous and independent is a great position to be in because you never feel like you owe anybody anything."

Ulrich also spoke about how his relationship with Hetfield has evolved since the release of METALLICA's 2004 documentary, "Metallica: Some Kind Of Monster", which followed the band through the three most turbulent years of their long career, during which they battled through addiction, lineup changes, fan backlash, personal turmoil and the near-disintegration of the group while making their "St. Anger" album. He said: "I think it's the best it's been now. I think we know where each of us are, we know much more about who each other is, and we know how far we can push each other, and I think there's much more of a partnership going on than there used to be. Now we're not fighting to win an argument. We rarely argue over anything, and we try to see each other's point of view much more. It's called growing up. [Laughs] So it's in a very good place — much more mature than it's been forever, basically."