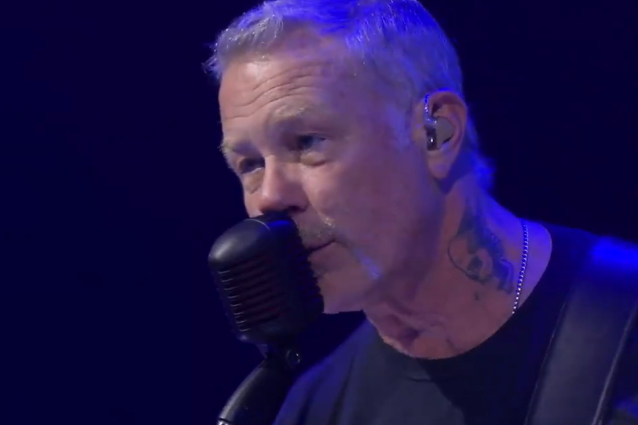 METALLICA and Lenny Kravitz performed at this year's Dreamforce, Salesforce's annual user conference, earlier today (Wednesday, December 2) in San Francisco, California. The event, which kicked off with CEO Marc Benioff's keynote, was held virtually this year to prevent the spread of COVID-19.

The 2020 edition of Dreamforce, re-branded as Dreamforce To You, was made available free to all via Dreamforce.com.

Last year, more than 170,000 people descended on San Francisco for Dreamforce, which is the largest software conference in the world. The event has generated more than $150 million in annual spending for the local economy.

METALLICA previously performed at the 2018 installment of Dreamforce in San Francisco, where the band angered some of the neighbors because of the noise, which traveled a considerable distance across the city.

Late last month, METALLICA drummer Lars Ulrich said that the band is nearly a month into "some pretty serious writing" sessions for its next studio album.

In August, METALLICA broadcast a show to hundreds of drive-in and outdoor theaters across the U.S. and Canada, as part of the "Encore Drive-In Nights" series. The concert was filmed nearly three weeks earlier, on August 10, at the Gundlach Bundschu winery, about a 30-minute car ride from the band's headquarters in San Rafael, California, and was subsequently edited and mixed by the band's award-winning production team to the highest standards possible.

METALLICA's "Live & Acoustic From HQ: Helping Hands Concert & Auction" was streamed live from the band's headquarters on November 14. The special acoustic show benefited METALLICA's All Within My Hands foundation.

Once again, it was an honor to be a part of @Dreamforce. Thank you to our friends at @Salesforce for including us in the fun & games during this crazy year.

Catch the on-demand replay of today’s soon over at https://t.co/rBk4rFKJqv. #DF2Upic.twitter.com/xvNAH7MXyr

Thanks for inspiring and so amazing everything ❤️ pic.twitter.com/BTDjR3m29Y

Once again super proud to be a #Salesforce@salesforce trailblazer & see my favorite band perform #Metallica@Metallica#Ohanapic.twitter.com/nsNqJaCf1m

Virtual @Dreamforce couldn't be better than this...proud to be part of this amazing company @salesforce , amazing keynotes @Benioff always cool to see the product in action
Special performance by @Metallicapic.twitter.com/2et4QZUGuY

I did not expect to enjoy this as much as I did! Wish we were there live! @Metallica at @Dreamforce ! Love it! Thanks @salesforce !! #DF2U#DF2020pic.twitter.com/3wUntsVIA7

I am DYING over the #Dreamforce chat during the #Metallica set. From "Wow, these old dudes can rock" to more than a couple "can we buy more Metallica and less #Slack" comments...gotta love these #trailblazer kids. pic.twitter.com/anFIzsMCi5

In the words of Marc Benioff, what’s #Dreamforce without Metallica? #DF2U#DF2020pic.twitter.com/zeDHipGYYc

@Metallica closing out my first @Salesforce#Dreamforce Keynote was EPIC! pic.twitter.com/4ftaxsZUMg

Enjoying so much @Metallica at the #Dreamforce
Thank you @salesforce@Dreamforcepic.twitter.com/HgdjUyacI6