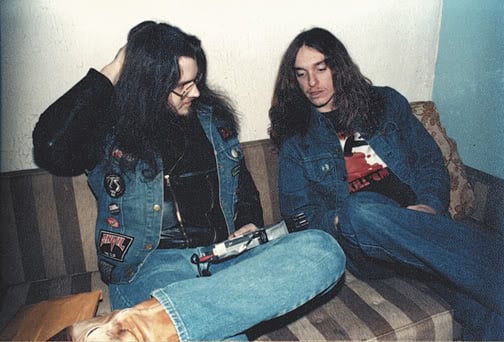 METALLICA's LARS ULRICH: 'BOB MULDOWNEY Was One Of The Early Believers In The Cause'

Said Ulrich: "Bob was one of the early believers in the cause, the metal cause that we all championed and that we all were inspired by. Later, we were fortunate enough that Bob also became a believer in the 'TALLICA cause and we in return were inspired by his belief in us and his championing our cause. Bob will be missed..."

A photo of Bob Muldowney with late METALLICA bassist Cliff Burton taken in April 1983 in New Jersey can be viewed at this location.

Muldowney was best known for his fanzine/magazine Kick*Ass which helped expose, support and feature such bands as RAVEN, MOTÖRHEAD, VENOM, THE RODS, TANK, EXCITER and RIOT as well as burgeoning underground thrash scene, giving, in some instances, the first coverage to SLAYER, MEGADETH, MEDIEVAL, OVERKILL, and ANTHRAX. Muldowney was also one of the first journalists to expose the death metal scene in its infancy, offering early press to SODOM, HELLHAMMER/CELTIC FROST, DESTRUCTION and BATHORY. It was Bob's love of true, honest metal, which drove him to deliver a demo tape of a then-unknown California band called METALLICA into the hands of then-Rock 'n' Roll Heaven store owner (and future Megaforce Records head honcho) Jonny Z — who was advertising with Kick*Ass at the time.

Bob's brutally honest approach in his coverage helped Kick*Ass develop a deep, loyal following who viewed his writings as "the metal bible." However, financial and distribution difficulties overtook the magazine and the final issue of Kick*Ass appeared in the fall of 1986.

Prior to his passing, Muldowney and fellow Kick*Ass writer Mike Hannon had begun work on a DVD history of Kick*Ass magazine in collaboration with former OVERKILL drummer-turned-director Rat Skates. Muldowney and Hannon have also re-exposed Kick Ass' history on this official MySpace site.