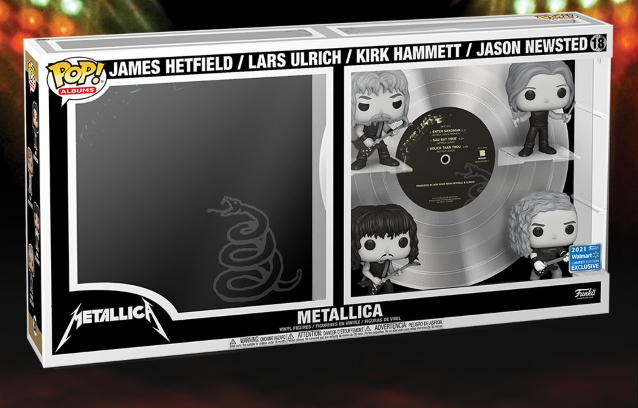 METALLICA's 'Black Album' To Get 'Pop! Albums' Figure From FUNKO

Funko and Walmart have teamed up to get in on the METALLICA "Black Album" celebration with a new-edition "Metallica" Pop! Albums figure. You can pre-order it now at Walmart.com. It is expected to ship in December.

Funko's Pop! Albums line is features music albums featuring the album itself, using the Pop! figure. The box is oversized and contains a standard Pop! to recreate the primary image on the cover. In addition, the background of the box adds a replica of the album cover to complete the look.

Previous classic LPs which have gotten the Pop! Albums treatment include AC/DC's "Highway To Hell" and MOTÖRHEAD's "Ace Of Spades".

Funko and Walmart are teaming up to get in on the #BlackAlbum2021 celebration with this new "@OriginalFunko Pop! Deluxe Album: Metallica - The Black Album - @Walmart Exclusive"!