METALLICA frontman James Hetfield was joined by his 16-year-old daughter Cali on stage last night (Friday, May 15) at the second annual Acoustic-4-A-Cure concert at The Masonic in San Francisco, California to perform an acoustic version of the Adele song "Crazy For You". Also appearing on the bill were Sammy Hagar (VAN HALEN, CHICKENFOOT, MONTROSE),ALICE IN CHAINS' Jerry Cantrell, RED HOT CHILI PEPPERS drummer Chad Smith and Linda Perry, the former leader of 4 NON BLONDES. Each artist performed an acoustic set at the event, proceeds from which will be donated to fund children's brain tumor research at UCSF Benioff Children's Hospital, one of the nation's leading children's medical facilities.

Fan-filmed video footage of the concert can be seen below. Photos are available at the Getty Images web site.

Acoustic-4-A-Cure was created by Bay Area rock legends Hagar and Hetfield, whose vision was to raise needed funds and awareness for the Pediatric Cancer Program at UCSF by bringing together some of their legendary friends and throwing a must-see concert for fans.

Regarding the decision to book mostly Northern California acts, Hagar told the Marin Independent Journal: "The reason I am doing it is because we want to keep expenses down. You can't fly people in from other towns and put them up in big suites. Half of the people on this show live pretty high, and you can't lowball them."

Hagar also acted as emcee at the event, telling the Marin Independent Journal: "I am a closet emcee-comedian. I feel it is my calling that, later on in my life, I could do the Grammy Awards and be the host of this and the host of that. I feel that I could pull that gig off — and I'm kind of interested in it, believe it or not." 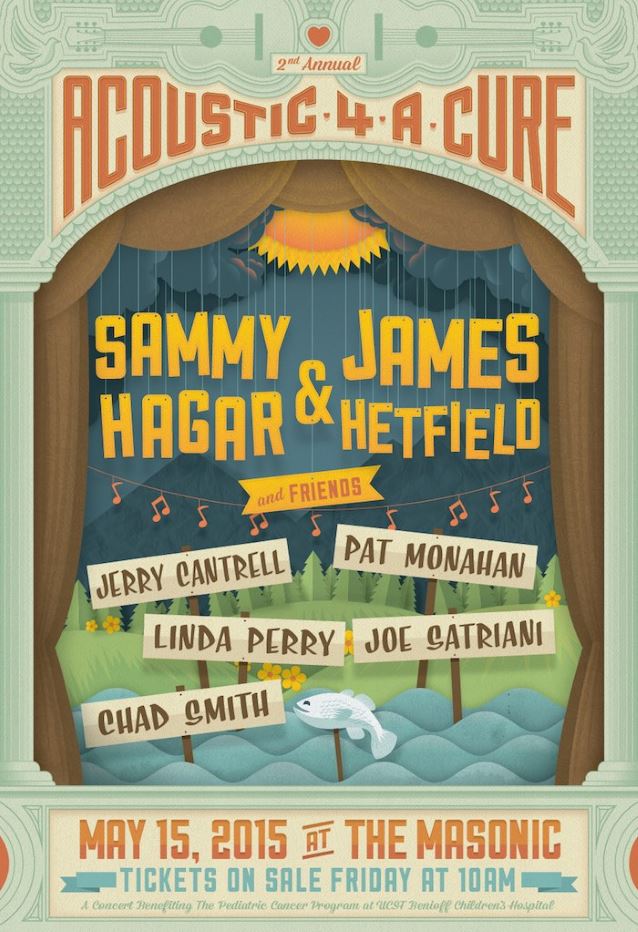