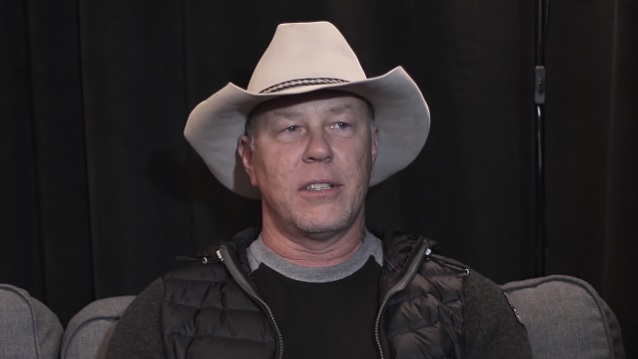 METALLICA's JAMES HETFIELD: 'We're Not Recreating The Same Song Over And Over'

In a brand new interview with the METALLICA fan magazine So What!, the four members of the band were asked why they are not seen as some sort of "heritage" or "legacy" act, like so many other groups who have been around for nearly four decades. "I'm not putting down other bands, because I know they give a fuck too, but we really give a fuck," frontman James Hetfield said. "I mean, we love what we do and we want to care for it and we want to continue to do it. So some of the character defects that we have spur us on. We're never satisfied. We are perfectionists. We want it to be the best or we can't stand behind it — we can't. So there's that honesty. It's a lot of hard work to be that kind of person, but it pays off. It pays off in the end, and we're not interested in worrying about if it sounds like us or not. We're not recreating the same song over and over like certain bands tend to do. They're afraid to stray from what they think people want to hear. We're not afraid at all, and we love exploring, but when you have that freedom, it ends up back at the same place most times. But you've got a new net that you've cast out, you've got some different influences, and everything influences us along the way, but mostly caring for METALLICA is the biggest influence."

Guitarist Kirk Hammett added: "I really think that our music and the nature of our music, the sound of our music, the mechanics of our music sounds incredibly lively and youthful. There's a youthful energy to our music that's inherently in our sound. We play with a lot of energy. We play with a lot of dynamics, and there's a certain amount of excitement. All that is youthful energy, that energy is coursing through you when you're younger, in your 20s. Our music inherently has that, and those factors are built into the psychological makeup of our music. So I think that in itself has a lot to do with why younger people don't see us as old 'fuddy-duddies,' to quote someone else. I believe that they don't view us as a band that's slowing down and resting on past success or victories. Whenever we put out an album, it sounds like young guys playing the music. I mean, the only way to get a direct reference on who's playing the music is the picture on the album. You look at the picture, like [drummer] Lars [Ulrich] said, [and you see] a bunch of fucking guys in our 50s who don't even know they're in their 50s!"

The METALLICA guys also talked about the overwhelmingly positive response to the band's latest album, 2016's "Hardwired… To Self-Destruct".

"I definitely feel grateful," Hammett said. "Grateful for the fact that our audience is still there supporting us… understanding the music on the same level as we understand it and [that they're] buying the album. And I'm grateful for them coming to see us. The shows have been amazing in terms of pure enthusiasm for the new material. That, to me, is the one thing that really stands out being on tour. Every time we play the new stuff, they're just fucking wrapping their arms around it. Which hasn't always been the case. And you know, it's nice to see because it's been a while. It's fucking been a while since we've had that sort of reception. And so I am so appreciative and so grateful that we can still go out there and make music that fucking people are getting and understanding, not only getting and understanding but fucking wrapping their arms around it and embracing it. It's fucking wonderful. I haven't seen that enthusiasm in a while."

You can read the entire interview at Metallica.com (free registration required). You can also watch the chat in three parts below.