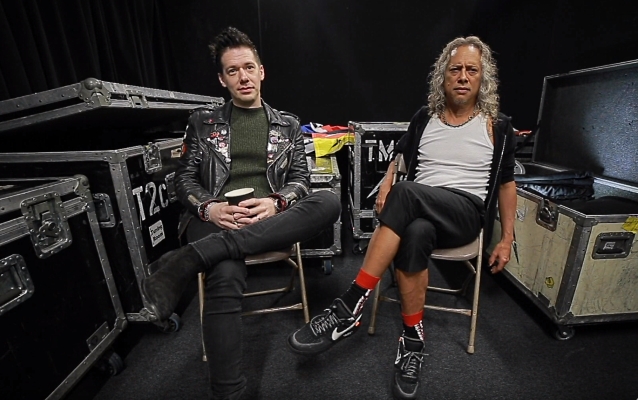 Before METALLICA and GHOST performed at Etihad Stadium in Manchester, England on June 18 as part of their joint European tour, METALLICA guitarist Kirk Hammett and GHOST leader Tobias Forge sat down for a quick "mid-tour natter" and METALLICA's official fan magazine, So What!, gatecrashed the chinwag. Check out the results in the video below.

Last December, Forge told the American Forces Network about the prospect of doing a full tour with METALLICA: "[I'm] very stoked. All of us grew up listening to METALLICA, and they're definitely one of my absolute favorite bands, and very much one of the reasons why I'm doing this. Of course, it means a lot. They've gone from being very far-away idols to over the years becoming basically mentors. They've been so supportive. We've played with them before, but never a consecutive tour like that, so to be able to do a full-on European stadium tour, that's a huge endeavor."

In a recent interview with Jorge Botas of the "Metal Global" radio show, which airs on the Portuguese public TV and radio broadcaster RTP, Forge was asked how he decides on a setlist for a METALLICA stadium tour. He responded: "I usually try to enforce songs that I think work very well live.

"I think our positioning now, as opposed to five years ago, when we played with METALLICA last, which was nice, but I think the upside now is that more people — not everyone — know who we are," he continued. "They might not be fans, but at least they're, like, 'This is a band that I know of.'

"On a big show like this, obviously, you have a lot of people coming out that maybe haven't gone to a hard rock show in five years, and the last time they went to a hard rock show, it was AC/DC," he added. "That's the thing when you're playing with a big, global, iconic band — you get people from all… You might have people who maybe saw METALLICA 20 years ago, and then they go one show every fourth year. I wouldn't wanna bother trying to play a song like 'Ghuleh', for example. We don't even play 'He Is' on a tour like this. We play the songs that work well, that don't lose the attention, because you need to be a little bit more to the point when you're playing in front of… When there's so many people, if you lose them, it goes out so quickly, because everyone's still there waiting for the bigger band. So, if you have their attention, it's great, but as soon as you lose them, they're, like, 'Oh…' And it just takes a few people to start booing, and then it starts."

Forge founded GHOST more than a decade ago and has written almost all of the group's music, while also performing for years in costume as first Papa Emeritus and now Cardinal Copia. His real name was a mystery for much of that time and still does not appear on GHOST LPs.

GHOST's latest album, "Prequelle", debuted in June 2018 at No. 3 on the Billboard 200 chart. The band will embark on a North American tour this fall in support of the disc, starting on September 13 in Bakersfield, California and wrapping on October 26 in Glens Falls, New York.